Mighty Mike in mood to claim crown at a canter 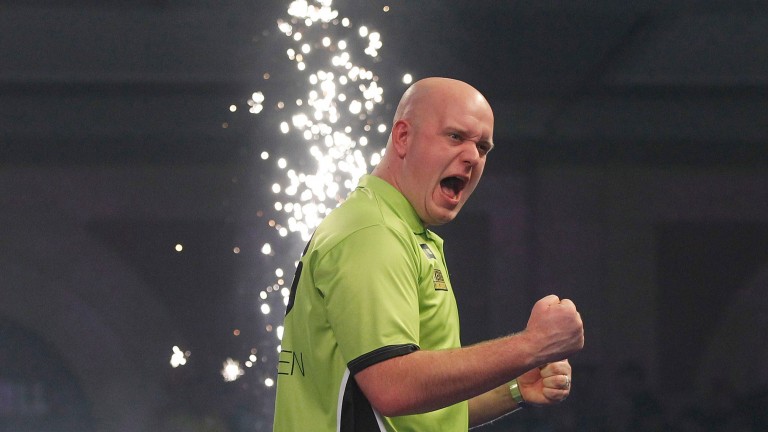 More fireworks are expected from Michael van Gerwen in the final at Alexandra Palace
Lawrence Lustig
1 of 1
By Steve Davies 1:46PM, JAN 2 2017

The records continue to tumble in the William Hill World Championship as Alexandra Palace braces itself for the ultimate clash of the titans in the final.

World number one Michael van Gerwen, the man who set the bar at a dizzying height in beating Raymond van Barneveld with a 114 average in Sunday night’s semi-finals, is the clear favourite to collect a second world crown.

Gary Anderson, the defending champion who is hoping to emulate Eric Bristow and Phil Taylor and become only the third man to win three crowns on the trot, is the outsider.

Given what we’ve seen from the two best players in the field, arrers fans will be anticipating a classic final – but it may not pay to bet on it.

The fact is that Mighty Mike is playing at a different level to anyone else and no matter what the Scot throws at him, the Dutchman will have an answer.

Barney threw in a performance in the semis that would have seen him batter pretty much anyone – yet he finished up on the wrong end of a 6-2 defeat, his 109 average not enough to get anywhere near his younger compatriot.

Anderson has yet to average over 100 in three previous finals and he definitely started cold against Adrian Lewis last year before going on to win 7-5. A slow start tonight and he may as well throw in the towel.

Anderson and Van Gerwen met in three finals in 2016, Anderson winning two of them. The most recent, however, was the Grand Prix final in October which Van Gerwen won.

Van Gerwen ought to win well and 7-3 looks the best correct-score option. It's also easy to see him breezing some sets so it could play to go under the total legs at 43.5. Twelve months ago, Anderson and Lewis went to 12 sets yet there were still only 45 legs played.

The layers have 180s in at 33.5 and even in this most spectacular of tournaments that’s probably high enough given the magnitude of the occasion.