Mighty Mike can lead them a merry dance in league 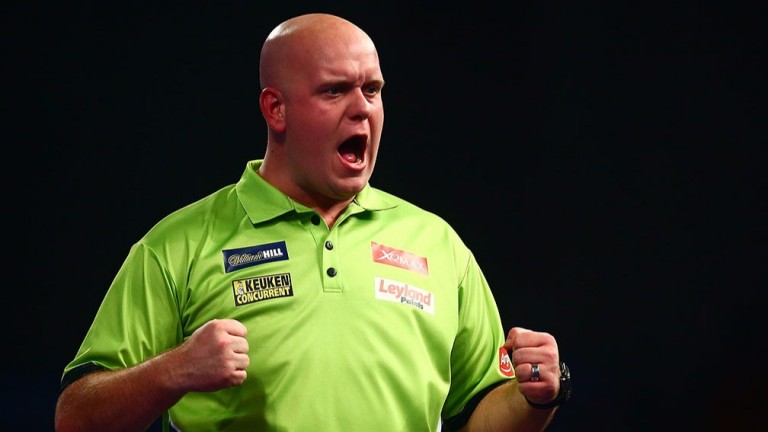 The best darts player in the world by an enormous margin is Michael van Gerwen and it is entirely feasible that he goes through the 2017 Premier League campaign unbeaten.

Betway have chalked up 10-1 about Van Gerwen winning or drawing all of his Premier League fixtures in the season to come, a price worth an interest. The dominant force in modern arrers lost only one Premier League match last term and could easily go one better in the year ahead.

Van Gerwen’s 2016 defeat came on the opening night – a 7-4 loss to James Wade after going 3-0 up – then Mighty Mike negotiated a further 15 league matches unbeaten before crushing Adrian Lewis 10-4 in their playoffs semi-final and Phil Taylor 11-3 in the final.

Taylor went unbeaten for three Premier League seasons from 2005 to 2008, a 44-match run, and Van Gerwen has taken over the tungsten baton as undisputed king of the oche. He has won 25 tournaments this year and does not turn 28 until April. It is a frightening prospect for his rivals, but this darting monster is probably still improving.

It is difficult to say the same about the rest of the elite. Taylor, 56, Gary Anderson, 46 and recently forced to wear glasses, Peter Wright, also 46, and Raymond van Barneveld, 49, are veterans. Wade and Lewis, in their early 30s, are also well exposed.

Somebody has got to win seven of 12 legs against Van Gerwen to defeat him in regulation League play, ten of 19 in the semis or 11 of 21 in the final. Winning any leg against the Dutch colossus these days is an achievement.

Mark Langdon Football
Arsene Wenger to leave his position as Arsenal manager
7-2 Betway
Arsenal have had the same manager since September 1996 but the “in Arsene we trust” brigade is getting smaller by the week and 7-2 that Wenger leaves the club in 2017 seems on the large side considering the Gunners are only 13-8 to miss out on the top four.

A difficult Champions League draw against Bayern Munich means it is odds-on that Arsenal will once again exit Europe’s premier club competition at the first knockout hurdle and a season which promised much early on is quickly fizzling out. Not for the first time either.

Nine points have to be made up on leaders Chelsea, while Tottenham and Manchester United are breathing down the necks of the fourth-placed Gunners in the hunt for Champions League qualification. If Wenger misses out on the top four, it may well be the end.

Let’s not forget the Frenchman is in the last year of his contract and reports in Italy are linking Juventus boss Max Allegri with Wenger’s job should it become available.

Chelsea and Liverpool have been galvanised by managerial changes, something that has not gone unnoticed with the Arsenal support, and Wenger may not make it beyond 20 years.

Back four or more drivers to win F1 grands prix this season with bet365, who may have underestimated how competitive 2017 will be.

In two of the last three years only three drivers won races, which explains the 1-2 quote about that happening again. However, you have to go back to 1988 for the previous time so few different pilots topped the rostrum.

The teams’ tech boffins have a heavily-revised rulebook to get to grips with, and with so little opportunity to test their designs before the season starts, we could see the pecking order change throughout the campaign.

The British & Irish Lions face a huge challenge in New Zealand this summer and the experience of Wales lock Alun-Wyn Jones makes him an outstanding candidate to lead the tour.

Jones captained the side in the third Test to clinch the series in Australia in 2013 and clearly has the confidence of coach Warren Gatland.

The captain needs to be someone regarded as a certain starter in the Test side but despite the emergence of new talent in the second row, particularly England’s Maro Itoje, Jones has been in fine form for the Ospreys and a good Six Nations could seal it.

If you had this bet in 2016 you’d have been cursing England in February, when they made 399-9 against South Africa, but cheering them in August as they racked up 444-3 against Pakistan at Trent Bridge.

Alex Hales (171) powered England to a new record total in 50-over internationals in Nottingham, demonstrating that scores well in excess of 400 are possible when batting conditions are good.

Teams have reached 400 in an ODI innings 18 times and seven of those have come in the last two years. South Africa did it four times in 2015 and since May 2014 Jos Buttler has scored the three fastest centuries in England’s 50-over history.

Those statistics underline the changing face of one-day cricket and even experienced bowling attacks can struggle to contain rampant batsmen – the six teams to have conceded 430 or more runs in a one-dayer include Australia, India, South Africa, the West Indies and Pakistan.