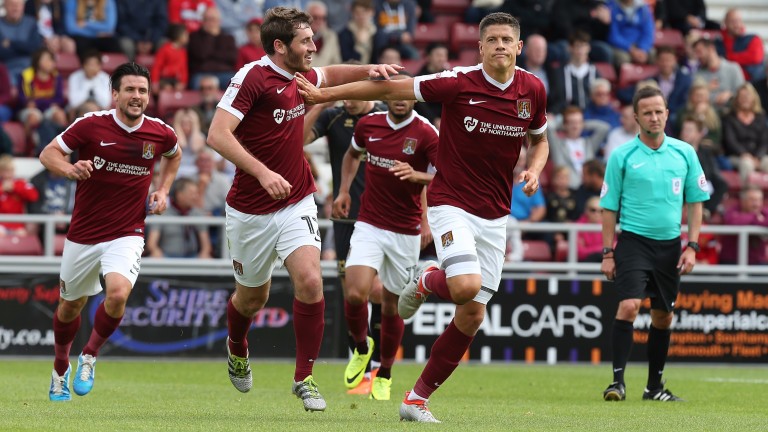 Cambridge v Wycombe
Shaun Derry joked that his Cambridge side could have had a swim in the English channel after Thursday’s draining FA Cup success at Dover but the lack of recovery time is no laughing matter for the United boss.

The first-round replay was a boost to the financial coffers as it was shown live by BT Sport but playing less than 48 hours before today’s clash with Wycombe was far from ideal.

and Derry will surely have to manage the squad given United face his former club Notts County away on Tuesday.

Wycombe are playing well enough to fancy their chances anyway but every little helps and while Cambridge were battling for survival in the FA Cup Gareth Ainsworth’s squad had their feet up in preparation for the trip.

Ainsworth’s side made a slow start to the campaign but his small squad was ravaged by injuries. Wycombe failed to fill up their bench in four of their opening five Sky Bet League Two encounters and started with five points from the first seven games.

However, Wycombe have now won five of their last ten matches in all competitions and that includes their FA Cup success at Portsmouth and a 2-2 draw at Doncaster which suggests Ainsworth is beginning to get it right on the road.

Wycombe have scored twice in each of their last four games and there are decent options in the final third with experienced pair Adebayo Akinfenwa and Paul Hayes as well as on-loan Millwall man Paris Cowan-Hall.

Northampton v Peterborough
There are a lot of derbies around Europe this weekend and one of them comes at Sixfields where Northampton will be aiming for revenge after Peterborough bashed them 3-0 only last month.

This should be a much closer affair as the Cobblers went into that London Road contest without influential duo Matthew Taylor and Jak McCourt which led to boss Rob Page using an alien formation that backfired.

However, despite having much more in their favour this afternoon Northampton may struggle to make it payback time.

The defensive discipline which laid the foundations for last season’s championship success seems to have disappeared with the only clean sheet in ten league games coming against a Southend side reduced to ten men early in the second half.

Struggling sides Shrewsbury, Gillingham and Bury have all scored twice against Northampton, while Posh, Millwall and Chesterfield notched three times in this shaky spell.

If Page does not find the right defensive formula they will be punished by a Posh side who have scored 27 times in their 17 Sky Bet League One games and go into this after a deserved 1-0 victory against Bolton last week.

Posh are built to score goals but a recent switch to a midfield diamond has made them better balanced with Michael Bostwick as the midfield holder, either side of highly-rated duo Chris Forrester and Da Silva Lopes.

That allows set-piece specialist Marcus Maddison the freedom to weave his magic and, while consistency is not Peterborough’s strong point, they have won six of their last eight matches.

Monchengladbach v Cologne
This is yet another derby and comes at a perfect time for Monchengladbach who can leave their poor form behind them with the return of many key players.

Andreas Christensen, Tobias Strobl and Raffael are among those who have returned to peak fitness after the international break with Gladbach decimated prior to the Bundesliga break.

Coach Andre Schubert admitted as much when he said: “We know why it did not go so well in the Bundesliga in recent weeks. If all players are fit, we are in good shape and can reach our performance limit, we can beat every team in the Bundesliga.”

That is a fair assessment of why Gladbach have no win in five Bundesliga matches but it is a run which also saw them head to Bayern Munich and have a man sent off early at Hertha. They missed two penalties against Hamburg and hit the woodwork in another draw with Frankfurt.

However, the Foals have won 16 of their last 20 home league matches and look fair value at odds-against to beat Cologne.