Mickelson primed for fast start but Tiger has tools to prevail 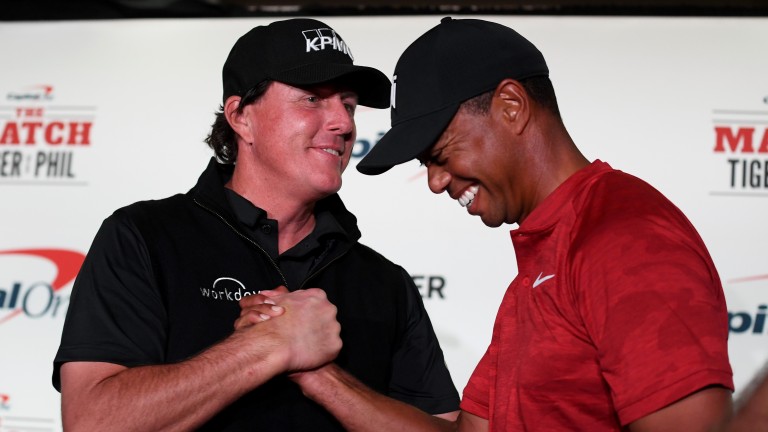 The Thanksgiving weekend will start with one of the best players of his generation giving another one a ludicrously meaty cheque, but Mickelson and Woods are not spending a cent of their own money. Sponsors and VIPs, who will be the only people allowed to spectate on the course, have provided the cash for an event which is on pay-per-view television Stateside.

Woods is a best-price 1-2 to triumph, while Mickelson is 7-4, and the most sensible betting strategy may be to back the outsider to make a fast start before the favourite ends up winning. Phil to be leading after nine holes, but Tiger to end up victorious is a 5-1 chance with Paddy Power.

The 7,560-yard, par-72 venue, does not give either player a particular edge. Woods carded a course-record 60 there in the early noughties – an incredible display of ball-striking in which he holed only one putt of more than 20 feet – but the layout was modified in 2008. It is designed by Tom Fazio, the work of whom Mickelson adores.

Woods has a superior head-to-head record when the American superstars have been paired together – 18 wins, 15 losses and four draws – and Mickelson has always had something of an inferiority complex when alongside the most successful player of their generation. The famous moment before the 2002 Tour Championship at East Lake when Mickelson cut short the announcer listing the achievements of Woods underlines the point.

But that was all in tournament golf – and this event is just for pure entertainment. Mickelson, the more natural showman, may enjoy the atmosphere of the Showdown at Shadow Creek more than Woods. Phil the Thrill could be the quicker to settle.

The front nine at Shadow Creek plays mainly right to left, which suits a Mickelson fade, while the back-nine plays mainly left to right, which suits a Woods fade. There is scope for Lefty to be in front at the turn, before the 14-times Major champion asserts his superiority on the more favourable terrain coming home.