First LPGA Major of 2018 can go to former child prodigy 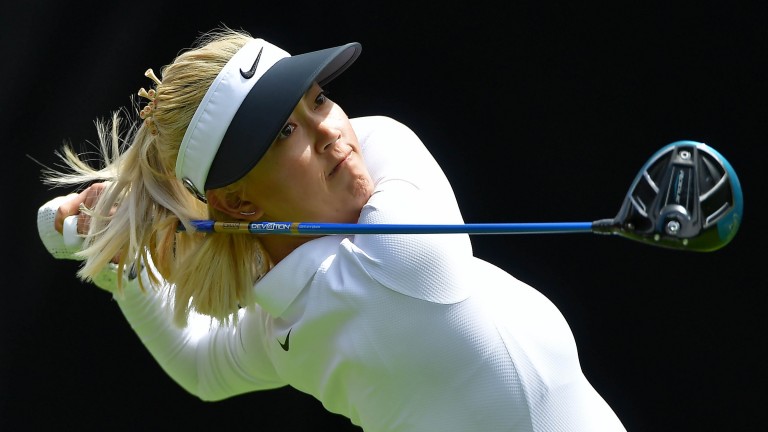 Michelle Wie should fancy her chances at the ANA Inspiration
Getty Images
1 of 1
By Jeremy Chapman UPDATED 8:11PM, MAR 28 2018

The Inspiration, first of the five LPGA Majors, gets plenty of Sky-time this week and it’s a punter-friendly tournament at 11-1 the field.

Like the Masters, it is played on the same course each year, the Mission Hills Country Club at Rancho Mirage, California, so the form is there for all to see.

This is the Major that used to be called the Kraft Nabisco and, before that, the Dinah Shore. It’s where the winner, by tradition, jumps into Poppie’s Pond by the 18th green at the end.

Whoever it is will relish being refreshed as this is a hot contest in more ways than one with temperatures scheduled to be around 33C all week.

Last year it was the scene of a dramatic final day when an official came out and slapped a four-shot retrospective penalty on leader Lexi Thompson after a TV viewer reported she had not replaced her ball correctly for an 18-inch putt in round three.

So instead of being two ahead with six to play, the young Floridian was two behind. She gamely got herself into a playoff with So Yeon Ryu but lost to the Korean’s first extra-hole birdie.

It was a brutal way of administering the penalty and there was much sympathy for Thompson. Happily, there was no lasting scar as she has won twice since and many will be rooting for her this week.

The 2014 winner may well get her second bite at the trophy but at three times the odds, 33-1 shot Michelle Wie rates better value.

The Hawaiian child prodigy played in the final group as a 13-year-old at Mission Hills in 2003 and finished ninth, then came fourth the following year and third at 16. But a long-lasting wrist injury slowed her career and she never quite lived up to the hype.

Even so, Wie was runner-up in the 2014 Inspiration, the same year she won her only Major, the US Open. She again performed well at Mission Hills 12 months ago when sixth to Ryu - and she’s a 2018 winner, at the HSBC World Championship in Singapore, her first success for four years.

Nobody is claiming Wie is the most consistent golfer on the planet but on a going week with the putter she is a formidable competitor. And with six top-tens from 13 Mission Hills visits, she’s on a course she can handle.

At 6,769 yards, Mission Hills isn’t a test of power, as Lydia Ko proved two years ago, but equally it doesn’t hurt to give it a wallop and Wie is one of the longest.

So too is Brittany Lincicome who has won The Inspiration twice, in 2009 and 2015, and started 2018 with a play-off victory over Thompson in the Bahamas.

Like Wie, she lacks consistency but comes into the week having just shot a spectacular 133 on the weekend to make the Kia Classic top ten after a slow start.

Olympic gold medallist Inbee Park, a seven-time Major winner, does not quite dominate the game as she used to but is still arguably the best putter around of either gender and can almost be guaranteed to contend.

She has been at the top so long it is hard to believe she is still in her twenties. Champion in 2013, she was only a shot out of last year’s play-off and is a winner this year, at the Bank of Hope Founders Cup in Arizona.

When she does win, she doesn’t mess about - the margin of victory at the 2016 Olympics was five, it was five again when she ran away with the Founders Cup two weekends ago and four when she won this championship in its Kraft Nabisco days.

Thai powerhouse Ariya Jutanugarn and England’s Charley Hull are feared. Hull’s second place two years ago was easily her best finish in a Major. It is not the only time she has played the course well.

Chinese ace Shanshan Feng isn’t ranked No. 1 in the world for nothing and Seoul sisters Ryu and Sung Hyun Park are attractively priced. But Ko has lost the winning knack and Suzann Pettersen is not the force she was.

Course overview Famous for its rolling hills, deep bunkers and signature 18th, a par-five with an island green, this resort course is always a decent test with single digits under par winning as often as not. Four players got into double figures last year.

Story of last year Lydia Ko was pitch-perfect at the last hole and her birdie there consigned Charley Hull and In Gee Chun to a share of second place in a thriller.

Weather forecast Relentless sunshine and temperatures up to 33C. Moderate wind, up to 12mph.