World darts final at Alexandra Palace should be a thriller 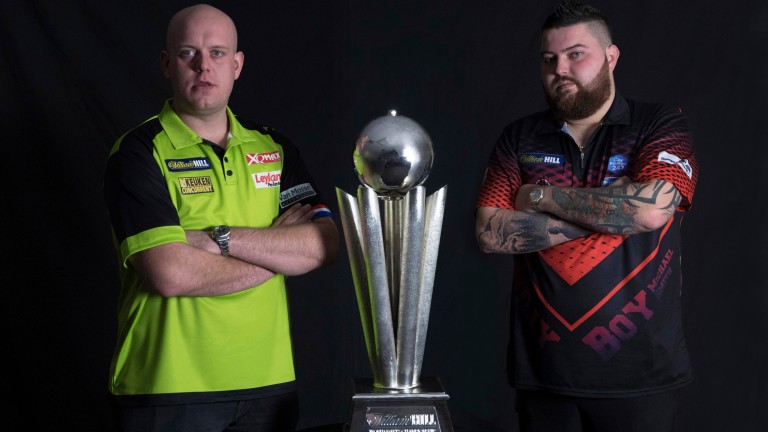 The perils of over-hyping a darts match were there for all to see on semi-final night of the William Hill World Championship, yet there is every reason for thinking that the final could turn into an epic.

Two-time champion and world number one Michael van Gerwen is the clear favourite to do a job on number ten seed Michael Smith but big-hitting Bully Boy definitely has the scoring punch to be able to turn the showpiece into a memorable one.

The 100-30 outsider has hardly put a foot wrong in a tournament where everything has gone his way and at the very least is worth supporting with a 2.5 sets start at 11-8 with BoyleSports.

Van Gerwen is the man to beat, of that there's no doubt.

He went into the tournament rated an easy-to-back 13-8 poke with a few question marks over him courtesy of a mixed autumn campaign. But he hasn't dipped under a 101 average on his way to a fourth final in seven years.

His demolition of big rival Gary Anderson in the last four was sublime – he averaged the best part of 105 and dropped only seven legs in a 6-1 rout of the Scot – and that sort of form ordinarily makes him hard to oppose.

But the fact that he wasn't worked by Anderson – or indeed anyone else having secured each of his five triumphs by at least a two-set margin – might be more telling. Over the course of 2018 he has looked vulnerable under pressure – it's just required someone at Alexandra Palace to actually put him under the cosh. And that man ought to be Smith.

These two have met nine times this year and Van Gerwen has won seven of those including an emphatic 11-4 success in the Premier League final in which he averaged 112.

But their most recent meeting – at November's Grand Slam – was a ripsnorter which the Dutchman edged 10-8.

What Smith boasts is scoring power. A massive 180 compiler – he smashed in 17 against Nathan Aspinall in his semi – he will win legs on his own throw and test Van Gerwen on his. It's which of these two has the edge in the finishing and Smith has been excelling with a tournament checkout average of 42 per cent.

Smith has, however, achieved that under relatively little duress. Seedings dictated that his route to the final should have featured games against Mensur Suljovic, Rob Cross and Peter Wright but instead he got Ryan Searle, Luke Humphries and Aspinall. And he only needs to miss one or two more doubles under a pressure he has never experienced before and Van Gerwen will pounce.

The other great unknown is the crowd. Traditionally fans of Van Gerwen, they may well get behind the Englishman in the final and we've seen Mighty Mike wilt before when the natives start giving him stick.

The incredible scoring power of these two means there will be plenty of holds and, in theory, a fair few sets going the distance. That in turns means over 42.5 legs at 5-6 with Hills looks a steal.

Seven of the last eight finals have produced 43 or more and they don't need to be marathons to oblige. When Van Gerwen chinned Anderson 7-3 two years ago there were 44 legs with six of the ten sets going the distance.