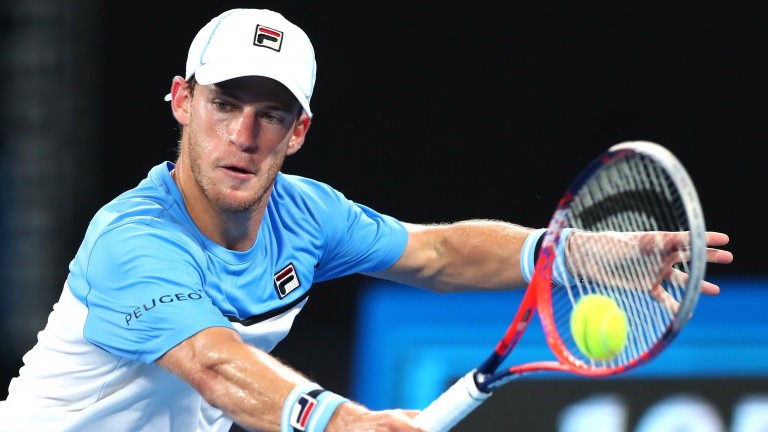 Diego Schwartzman makes up for a lack of power with some terrific groundstrokes
Michael Dodge
1 of 1
By Adrian Humphries 8:00PM, MAR 22 2019

It's a real David v Goliath clash when diminutive Diego Schwartzman takes on towering Reilly Opelka for a place in the last 32 of the Miami Open and it could pay to back the Argentinian to sling the American out of the singles.

The 5ft 5 1/2in Schwartzman is a pretty decent operator on clay, as would be expected from someone from his country, but if anything he's even better on hard courts and will be keen to follow on the tradition of Argentinian players prospering in Miami.

Juan Martin del Potro is not competing due to injury, so Schwartzman will carry his country's chief hopes and he seldom underperforms on the fast, reliable terrain he loves.

Opelka is having his best season and won his first main-tour title in New York in February. The 6ft 11in Michigan native has poten­tial but even though he's making strides, it may take a few years until we see the best of him.

Schwartzman, who has been installed favourite, has come in for early support and that's not surprising.

Qualifier Andrey Rublev may now be fit enough to pose problems for Marin Cilic, while it's a slight surprise to see Miomir Kecmanovic well backed to deny outside title hope Frances Tiafoe.

In the women's third round, there's an all-Australian clash between Queensland aces Ashleigh Barty and Sam Stosur. Barty is in with a genuine title chance at the Hard Rock Stadium, but Stosur produced two of her best performances in a long time to defeat Evgeniya Rodina 6-4 6-2 and Madison Keys 6-4 4-6 6-4.

FIRST PUBLISHED 8:00PM, MAR 22 2019
With Del Potro not competing in Miami due to injury, Schwartzman will carry Argentina's chief hopes and he seldom underperforms on terrain he loves