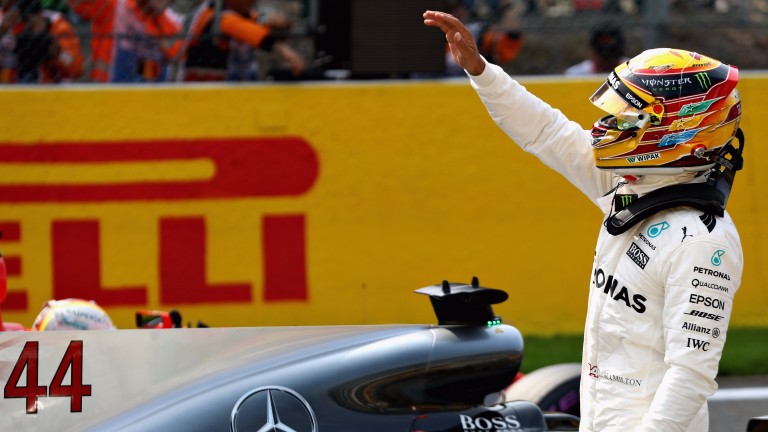 Hamilton has not dominated the weekend, but when it has counted most he has delivered in style, and barring some drama it’s hard to see him failing to justify 8-15 favouritism.

Starting alongside Hamilton on the front row is championship leader Sebastian Vettel.

The Ferrari driver won in Hungary last time when his teammate Kimi Raikkonen played faithful tailgunner after Vettel’s car developed handling problems. And the German again had Raikkonen to thank for his lofty grid position.

Raikkonen had looked a bigger threat than Vettel to the Mercedes throughout the weekend at Spa-Francorchamps, but the Iceman made a mistake on his final qualifying attempt and had to settle for fourth.

A stroke of good fortune for Vettel saw him follow Raikkonen through the fastest section of the circuit on his final shot at qualifying, picking up a handy slipstream and setting a time quick enough to split the Mercedes cars at the front.

Bookmakers see Vettel as a serious contender for victory. He’s just 11-4 to win, but staying ahead of Bottas may not be as easy as that suggests.

The Ferraris feature upgraded suspension and aerodynamics for this race and have been closer to Mercedes’s pace than might have been expected.

But the Silver Arrows have upped their power this weekend and when they unleashed it for the first time in the second segment of qualifying the signs were ominous.

They outpaced Ferrari by 6mph on the straights, and with the benefit of DRS, Bottas will have little trouble passing Vettel if he can get close enough to him coming on to the main straight.

Ferrari scored a 1-2 finish in Hungary before the summer break, but on the power circuit of Spa, a Mercedes lockout looks far more likely.

Hulkenberg has been his usual consistent self, picking up 26 points in dribs and drabs including two sixth-place finishes.

The German starts seventh on the grid in Belgium and he is worth backing to crack the top six once again at 11-4.

Logic dictates the first six positions should be occupied by Mercedes, Ferrari and Red Bull drivers, however that has happened only once in the first 11 races of the season.

One of Hulkenberg’s sixth-places came at Silverstone, which is as similar a track to Spa as the circus has visited so far.

Palmer may pick up a five-place grid penalty after gearbox trouble ended his qualifying session early, but even if he does he looks a good bet in bet365’s group betting.

The Brit is up against McLaren’s Stoffel Vandoorne, who starts last after a ludicrous 65-place penalty, the hapless Lance Stroll of Williams and F1’s bad boy Kevin Magnussen.

Even with a penalty Palmer would start second in the group, two places behind Magnussen, whom he was the best part of a second faster than in qualifying.

Palmer, who has yet to score a point this season, is widely expected to lose his seat at the end of the year, but he can give his ailing chances a boost.