Rory McIlroy primed for second victory of the year 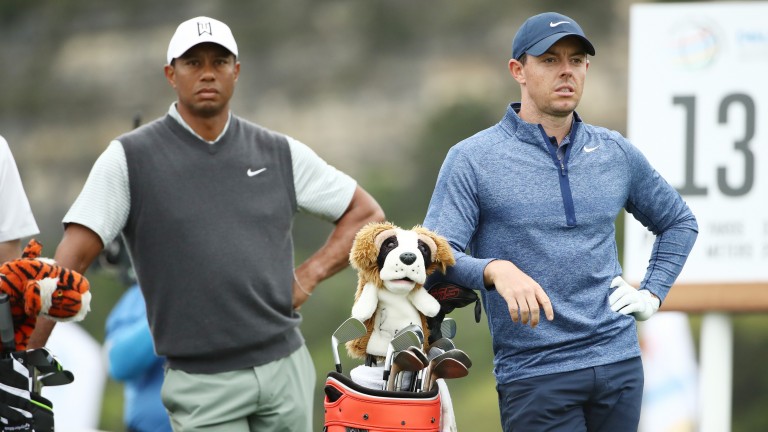 Tiger Woods won at Augusta for a fifth time in April and the great man tees up at another happy hunting ground this week in the Memorial Tournament. He has triumphed at Muirfield Village five times, including three in a row from 1999 through 2001.

Seven years have passed, though, since Woods was last Memorial champion, and his only post-Masters outing this spring resulted in a missed cut in the US PGA, an event where he was feeling under the weather. He was hosting a 'Tiger Jam' charity event in Las Vegas last weekend and may not be at full throttle until the US Open in the middle of next month.

Justin Thomas is another of the market principals who has excuses for not being at his best. Thomas has not competed since the Masters, skipping Quail Hollow and Bethpage Black, because of an injured wrist. The world number six is entitled to be rusty on his return to action.

With Brooks Koepka and Dustin Johnson absent, doubts surrounding the well-being of Woods and Thomas, and the unrestrained early gamble on Patrick Cantlay destroying any value that he represented, this looks a week to side with the increasingly consistent Rory McIlroy.

Cantlay, fourth at Muirfield Village last year and with form figures of 9-3-3 from the Masters through the US PGA, has caught the attention of the betting public and must be greatly respected. It should be noted, though, that he has won only one low-grade US Tour title, so it is unwise to be smashing short odds about the 27-year-old for high-class gatherings like this one.

Cantlay is no longer double the price of McIlroy, which is remarkable given the latter is a 15-time US Tour victor with four Major titles in his locker. McIlroy, less than three years older than the American, boasts another seven European Tour wins on top.

An each-way investment on the favourite at 9-1 looks rock-solid given the way he has performed in 2019 and the much improved Memorial preparation he has enjoyed thanks to scheduling changes this season.

McIlroy's form figures this year are a hugely impressive 4-5-4-2-6-1-9-21-8-8. The first two were course debuts at Kapalua and Torrey Pines, he was beaten by an inspired Dustin Johnson in Mexico, he conquered the strongest field of the season to triumph at Sawgrass, he was beaten by Woods in the Match Play, his worst result came under the ultimate pressure of Grand Slam chasing at Augusta, and he fought back magnificently from a horror start to the US PGA last time out.

McIlroy has hardly put a foot wrong this year. All departments of his game are in order and there has been an encouraging improvement in his attitude, with a new-found calmness on show and a better response to adversity. The old Rory would have surrendered when seven over par through 12 holes of round two at Bethpage Black, well short of the cut-line, but he covered his final six holes in four under to qualify, then delivered a pair of weekend 69s to claim another top-ten finish.

Perhaps marriage, turning 30, or reading the sports psychology books he raves about, have had an impact on McIlroy, who has been oozing maturity and assurance in recent weeks. This should become a multiple-win season in the fullness of time and Muirfield Village is a fantastic opportunity. McIlroy has been handicapped on previous Memorial visits by its former proximity to the BMW PGA Championship at Wentworth. Five of his seven Memorial starts have come immediately after he has trekked back from Surrey, having been the headline act for the European Tour's flagship event. For his Memorial debut in 2010, he had a week off between the PGA and the Memorial, and in 2016 he hosted and won the Irish Open and had a week off before the Memorial.

European Tour duties have denied McIlroy the chance to arrive at 'Jack's Place' fresh and firing, yet he has still posted respectable results there of 10-5-MC-57-15-4-8. His best finish came when he skipped the PGA in 2016 – the benefits of a breather clear – and for this edition he has stayed Stateside in the Memorial build-up for the first time.

An energetic McIlroy, who won the 2014 WGC-Bridgestone Invitational at another Ohio track, is finally able to do himself justice at a course which suits him greatly and receive an overdue trophy from Nicklaus on Sunday.

The biggest danger to McIlroy is arguably Hideki Matsuyama, who can match the Northern Irishman for laserlike iron-shot approaches. Matsuyama, who made his Presidents Cup debut at Muirfield Village in 2013, won the Memorial the following year, then finished fifth in 2015.

Bryson DeChambeau bossed last year's Memorial as world number 38 and at a best price of 55-1. Since then, he has won another three US Tour titles, including two FedEx Cup playoff events, as well as the Dubai Desert Classic by a seven-shot margin, and is world number eight. Yet 35-1 is still on offer. That seems generous.

The reason for the juicy carrot about the defending champion is three consecutive missed cuts – Heritage, PGA and Colonial – but it looks an overreaction. An ice-cold putter meant missing the Heritage cut by a shot with a Masters hangover, then he got a downer on the Bethpage set-up early in the PGA, complaining about the length of holes. A lacklustre pair of 72s at Colonial can be forgiven, too, and a return to Ohio can revive focus and fortunes. DeChambeau's Web.com Tour victory came in Ohio – the 2016 DAP Championship.

The best outsiders are Peter Uihlein and Jason Kokrak. Uihlein has rediscovered his A-game, finishing fifth in the Byron Nelson and 13th at Colonial, and he was fifth in the Memorial last year. The former world number one amateur won in Ohio on the Web.com Tour in 2017.

Kokrak has been performing superbly all year, losing the Valspar Championship by a shot, posting eight top-20s. He grew up in Ohio, moved back there last year, and has the form and confidence to make an impact in his home event for the first time.

Aaron Wise
The classy youngster has been finding his feet after a slow start to the year and is good enough to mix it with the elite.

Luke List
The Seattle man finished sixth in the US PGA last time out – by far his best Major effort – and that could provide the springboard for an overdue maiden US Tour title.

Justin Rose
The Englishman won at Torrey Pines at the end of January, but has been generally poor since. The 2010 Memorial champ loves this venue, so maybe it will kickstart him into life.

Matt Kuchar
The 2013 Memorial winner nearly always forces his way on to the Muirfield Village leaderboard and he will expect to contend as FedEx Cup leader this week.

Rickie Fowler
The Phoenix Open champion has finished second and eighth in the last two Memorials, so has every chance of immediately shrugging aside his Colonial missed cut.

Tony Finau
The regular US Tour bridesmaid tried a new putter and grip at Colonial last week and finished runner-up. He has been stuck on one win since March, 2016.

When to watch Live on Sky Sports Golf from 1pm Thursday

Time difference Ohio is five hours behind the UK and Ireland

Course overview This Jack Nicklaus design, which has hosted the Memorial since 1976, has always proved a challenge for the US Tour’s finest. The 2013 Presidents Cup was staged there too. Nicklaus likes to create generous fairways but the bunkers at Muirfield Village punish the seriously errant. The greens are usually in majestic condition. It is more of a ‘second-shot course’ with hardly any margin for error on approach shots. The four par-fives (the fifth, seventh, 11th and 15th) are great chances for birdies, as are the short par-fours of three and 14. The 16th, 17th and 18th are seriously tough, usually averaging well over par, so the possibility of a late crumble is huge

Story of last year Bryson DeChambeau three-putted the final hole, falling into a playoff with Kyle Stanley and Byeong Hun An. Stanley was eliminated at the first extra hole, before DeChambeau defeated An with a birdie at the second

Weather forecast A stormy start to the week is set to spill into the competition days, so the course should be playing soft and long. Light to moderate breezes

Type of player suited to the challenge Accurate iron-play is the key to slaying Muirfield Village. Recent victories have gone to those carrying laserlike irons on a track where the second shot is usually considerably more difficult than the first

FIRST PUBLISHED 8:00PM, MAY 28 2019
McIlroy has been handicapped on previous Memorial visits by its former proximity to the BMW PGA Championship at Wentworth