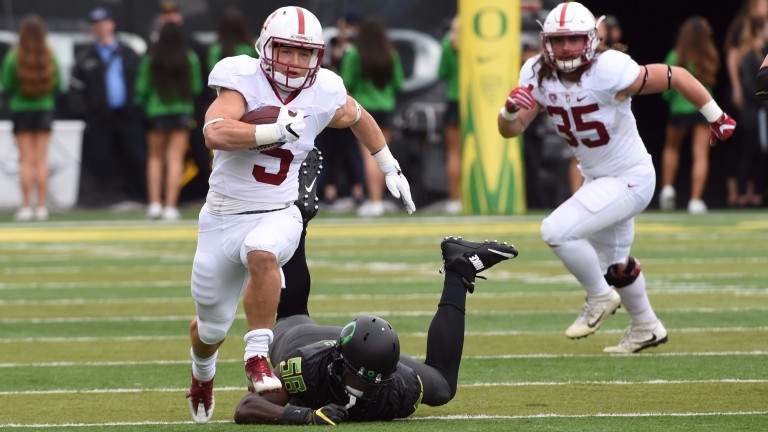 Live on Sky Sports 2, 1am Friday

It is more than four months until New England start their defence of the Super Bowl title they won in such dramatic fashion in February, but excitement in NFL circles has reached fever pitch with the start of the college draft.

The best of the sport's young talent will wait to see if they have a future in the game as each of the 32 franchises take turns to select what they hope will be the superstars of tomorrow.

Trades and deals could alter the picture and have even been carried over from previous years - Cleveland, Tennessee and New Orleans have two first-round picks while the Patriots, Minnesota and the Los Angeles Rams have none - and that could still change in the course of the three days as teams prioritise the type of talent they wish to recruit.

The Browns, who won one of their 16 matches last season, have the right to go first and bookmakers are convinced they will select defensive end Myles Garrett from Texas A&M.

Garrett is 1-8 with Sky Bet to be selected first, with North Carolina quarterback Mitchell Trubisky at 9-1 with Betfair.

Both could end up playing at Cleveland. The Browns still have a need for a quarterback and have the 12th pick as well after trading last season to allow Philadelphia to select their QB Carson Wentz.

And he could fall that far down the list as many of the teams at the top of the order, the less successful last season, have plenty of other gaps to fill, particularly defensively.

Jacksonville do not fall into that bracket having boosted their defence with established NFL players in free agency and they have been linked with one of the most exciting prospects, LSU's Leonard Fournette.

The physical running back would help quarterback Blake Bortles greatly and he is just 1-5 to be the first rusher selected, but it is worth making a small investment on Stanford's Christian McCaffrey being not too far behind.

He could be a well-suited selection for Carolina, who are looking to ease the rushing workload on QB Cam Newton and have the eighth pick.

McCaffrey is a versatile performer who can work as a slot receiver and a kick returner so he would give the Panthers plenty of options, so 19-20 that he goes before the tenth selection could prove a wise investment.

He is expected to go in the first round with whispered interest from many suitors but while there is also lot of talk about Miami's David Kjoku, he may just slip out of the first round .

He is highly rated but a chance could be taken on backing under two tight ends to go in the first 32 picks at 2-1.