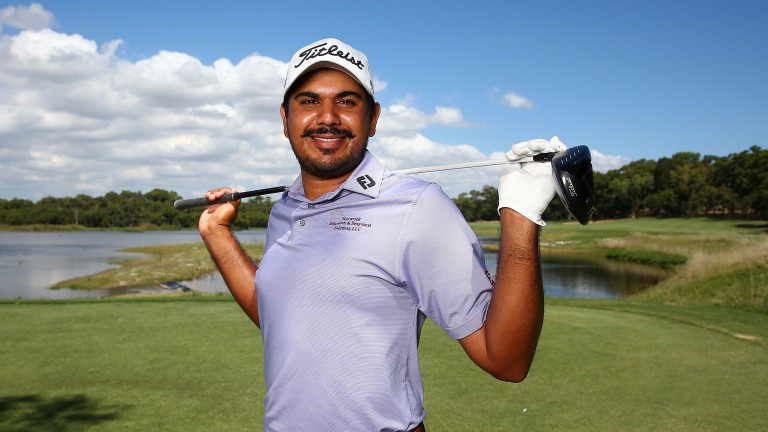 Thomas Pieters has become a regular European Tour favourite over the last month, but the infuriating Belgian has not won an individual event since August, 2016, and the Maybank Championship market leader is an unappealing option.

Pieters is making his debut at the tight, fiddly Palm Course, a track which requires patience, precision, sound strategy and a calm head in sweltering conditions. It is difficult to trust this fiery character in such circumstances.

The next two in the betting are European Tour maidens. Jorge Campillo, runner-up last year and tied second in his last two Tour outings, will attract formbook students, but the 32-year-old Spaniard has never even won on the Challenge Tour, while in-form Frenchman Mike Lorenzo-Vera is two years older and has always been found wanting in this grade.

The best value option in a wide-open event could be Jason Scrivener, an accurate, improving Australian well suited to the Palm Course assignment.

Scrivener boasts fantastic form figures in the Hong Kong Open, which is a similar test to that which he faces this week. Hong Kong Golf Club is a tight, tree-lined, typically humid layout, where only the straightest of hitters can survive, and the Perth man has finished third, tenth and third there in his three visits.

One previous start at the Palm resulted in a missed cut by a shot 12 months ago, but that narrow failure does not change the fact that Scrivener is well equipped to score at this venue, and impressive recent efforts suggest he will do himself justice this time.

Scrivener, who turns 30 next month, has not missed a cut since the British Masters in the middle of October. In a field full of strugglers, that consistency speaks volumes, and this season he has stepped up a gear. Third in Hong Kong was followed by sixth place in the Australian PGA, then 16th in Abu Dhabi, seventh in the Dubai Desert Classic and fifth spot in the Vic Open.

Scrivener won his maiden Australasian Tour title with a six-shot romp in the NSW Open at the end of 2017, and this tidy player, stalking the top 100 of the world rankings for the first time in his career, looks ready for a European Tour breakthrough.

Campillo and Lorenzo-Vera have eyecatching course and current form, but have never triumphed. Fabrizio Zanotti can marry similar credentials to two previous European Tour titles, including one on this course, so the Paraguayan should be shorter in the betting.

Zanotti, a relentless fairway-finder, has an ideal game for the Palm Course, where he improved his score each day (70, 69, 67, 63) to win the 2017 Maybank in glorious fashion. That effort came after he had started the year with three missed cuts and arriving low on confidence.

This time Zanotti is full of belief, with form figures of 15-32-29-24-2-11 from his last six events. A four-putt derailed him at the 70th hole of the Oman Open at the start of this month – a tournament he probably feels he should have won. Despite a brilliant birdie at the 18th, he had three final-round double-bogeys on his card and lost by a shot.

The Maybank looks a golden opportunity for Zanotti to make up for the one that got away in Oman. He is swinging superbly and the layout is ideal.

Gaganjeet Bhullar's European Tour future is becoming increasingly secure with every passing week and the rock-solid Indian could turn consistency into silverware on Sunday. Bhullar, a prolific champion on the Asian Tour, craved a permanent spot on the European Tour and victory in the Fiji International in August earned him a card. He is well on his way to retaining it after opening this season with form figures of 27-38-34-27-31-5, finishing only two shots shy in Kenya last Sunday.

Bhullar, who finished 20th and 27th in the Maybank in the last two years, will relish this test of accuracy, while the same can be said of in-form Thai Jazz Janewattananond, who has won three times on the Asian Tour at the age of 23. His most recent success came in a decent Singapore Open in January, when he repelled Paul Casey, Matt Fitzpatrick and Sergio Garcia with a pair of 65s over the weekend.

Janewattananond closed with a 64 for fourth place in the New Zealand Open last time out and should enjoy the set-up at Saujana, while local lad Gavin Green must also be in the staking plan. Kuala Lumpur-born Green lifted multiple trophies at Saujana in his amateur days, won the Asian Tour Order of Merit in 2017, and is one of the most promising youngsters in Asia. His European Tour rookie season was a success – he made it all the way to the Nedbank – and the powerhouse has shown enough this term to hint that home-city glory is within his compass. He employs a one-iron to good effect on tracks like this, where he has to rein himself in on the tightest holes.

Others to note
Aaron Rai
The accurate Englishman won the Hong Kong Open in November and should take a shine to a similar set-up this week. The three-time Challenge Tour champion is making his Maybank debut, though, and is yet to find top gear this term.

Shubhankar Sharma
The defending champion finished ninth at Saujana prior to his victory and this course is ideal for him. Like Rai, though, Sharma has been unimpressive since the Hong Kong Open.

Wade Ormsby
The Aussie plodder, Hong Kong champ in 2017, relishes tracks where his driving accuracy is fully rewarded. Second place in the Vic Open last month suggests he could be a Maybank factor.

Bernd Wiesberger
The giant Austrian made nine birdies in a row in round two of the 2017 Maybank, eventually finishing third. He has been struggling since returning from injury just before Christmas, but this event provides a chance to turn the corner.

Phachara Khongwatmai
The Thai prodigy has seen his career stall, but he is only 19 and can be expected to surge again soon enough. Both his previous Palm Course spins have yielded a top-20 finish.

When to bet By 11pm tonight

When to watch Live on Sky Sports Golf from 3.30am Thursday

Saujana took over in 2017. Carved out of a former palm and rubber plantation and set among rolling hills and lakes, Saujana has two championship courses – the Palm Course and the Bunga Raya Course – both designed by Ronald Fream.

The Palm, as for all the most significant events, will be used this week. It was upgraded and lengthened prior to the 2017 event. With five par-fours of under 400 yards and two par-fives on each nine, it is a fairly straightforward assignment for professionals.

Tight, palm-lined, undulating fairways, and fast, tricky greens, provide a decent test of precision and touch. The back nine traditionally plays easier than the front

Story of last year Shubhankar Sharma conjured a flawless ten-under-par final-round 62 to carve through the field, the Indian starting in 19th place before winning by two shots

Weather forecast Extremely hot, calm, sunny and sticky for the most part, with a thunderstorm threat for Thursday afternoon and Sunday afternoon

Type of player suited to the challenge Saujana demands straight driving along tight, tree-lined fairways, and the touch of an angel on undulating greens. Asians will be more comfortable in the oppressive heat