May hanging on as bookies fancy another election 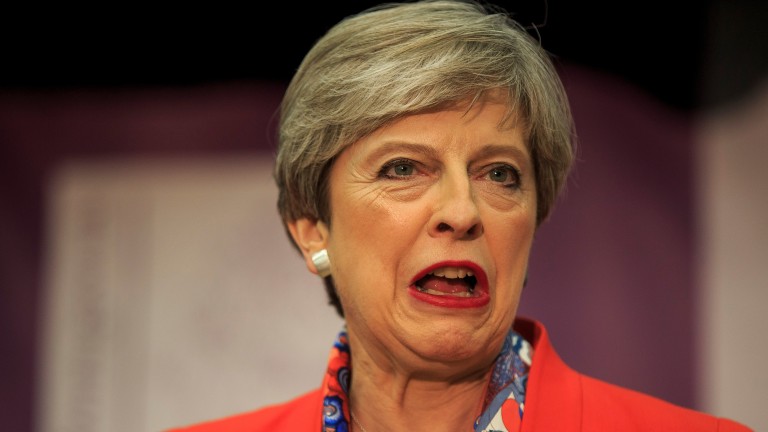 Prime minister Theresa May clung on to power on Friday after a dramatic general election, but bookmakers are not ruling out that the UK will have to go back to the polls before the end of the year.

May had been looking to boost the Conservative parliamentary majority from 16 after calling the snap election seven weeks ago, but her plan to strengthen her hand before next week's Brexit negotiations backfired.

With London constituency Kensington still waiting to declare a result after three recounts, the Tories could claim just 318 seats, eight short of an overall majority and are now planning to govern with the help of the Democratic Unionists, who took ten seats in Northern Ireland.

The Conservatives were 1-5 to claim more than 326 seats but fell short in another seismic political-betting shock following last year's surprise victory for Leave in the Brexit referendum and Donald Trump's win in the US Presidential election.

With Labour having won 261 seats, the Scottish Nationalists 35 and the Liberal Democrats 12 - other parties claimed the remaining 13 seats, including eight Sinn Fein MPs who will not take their place at Westminster - Betfred are 9-4 that a second election will be held before the turn of the year.

Others are as short as 11-8 for such an occurrence and it would be only the second time since 1924 that two general elections have taken place in the same calendar year.

Coral and Ladbrokes are 5-1 that the next national poll takes place in 2018, while Betway are confident that the minority government will be able to hold on to power until at least 2020, which is a 11-10 shot.

May remained keen to get on with the job after informing the Queen that she would be able to form a government, although there was plenty of pressure from inside and outside her party for the former home secretary to resign.

She was criticised for the way she directed the Conservative campaign and bookmakers see foreign secretary Boris Johnson as the next Tory leader in waiting.

The former Mayor of London is 3-1 with Coral to take the reins and as short as 6-4 elsewhere. Brexit secretary David Davies is 4-1 while home secretary Amber Rudd, who held on to her Hastings & Rye seat with a majority of just 346, is 6-1.

One rising star who has attracted plenty of early money is the Tory leader in Scotland, Ruth Davidson.

The MSP is 12-1 with Coral to get the top job even though she did not stand for a Westminster seat, and after the Conservatives gained 12 seats north of the border, she is as short as 4-1 elsewhere.

Davidson had been 25-1 to replace May when the polls opened on Thursday.

While Jeremy Corbyn never looked likely to steer his party to a majority, the election was hailed as a big success for the Labour leader, who looks to have done more than enough to keep his job having helped to gain 29 seats.

Yvette Cooper is 3-1 to eventually replace him, while Jo Swinson is 15-8 to replace Tim Farron as the Liberal Democrats' leader whenever he leaves his post.

Farron won his Westmorland and Lonsdale seat with a small majority of 777, but former leader Nick Clegg was not so fortunate as his Sheffield Hallam constituency fell to Labour.

One leadership post that is up for grabs is Ukip, who failed to gain a single seat.

Leader Paul Nuttall resigned after he gained just 3,308 votes in Boston & Skegness, despite the fact it was the constituency that saw the highest Leave vote in the EU referendum. The party also lost their only seat, Clacton, to the Conservatives.

Unsurprisingly, former leader Nigel Farage has emerged as the favourite to take over and he is 5-4 with Betfred and Ladbrokes.

After Brexit and Trump, bookmakers had been on alert for another upset, but it still came as a shock when the 10pm exit poll on Thursday suggested the Conservatives would lose seats and fall short of a majority, writes Phil Agius.

There followed a night of wild market fluctuations, with Labour leader Jeremy Corbyn going favourite to become the next prime minister at one stage, while backers of a Conservative majority, which had been as short as 1-33 on May 10, found themselves on a costly loser.

The winning election outcome, a Conservative minority government, had been an unconsidered 20-1 shot in mid-May. That was no longer the case when the clock struck midnight, by which time a Tory minority was 11-4. It was 8-11 by 2.50am and 1-6 before 4am.

Labour’s early surge really had the marketmakers on the run. Not only did Corbyn overtake May in the next PM market, but a Labour majority – an unthinkable 20-1 shot when the election was called and 40-1 in places on May 11 – had seen support and got as low as 8-1 at 1.30am.

Becoming the largest party but without a majority looked even more likely and a Labour minority government was on offer as low as 6-4 in the early hours.

Those who backed a Tory majority in-play as it drifted got a better-priced loser than ante-post punters, but some would have collected a decent return after May was eased to 13-8 to remain PM. She was still 5-4 at 6am but 1-5 by 7.30am.