McIlroy and Spieth tailed off at Quail Hollow 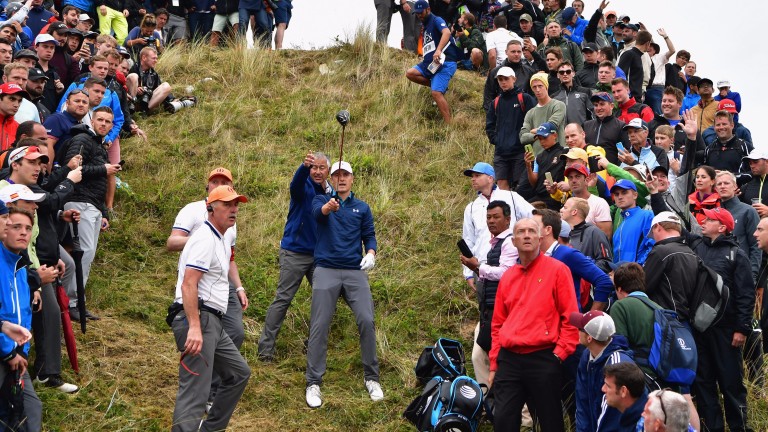 Hideki Matsuyama took control of the USPGA Championship in round two, the buzzing Japanese raider firing a seven-under-par 64 to claim a share of the lead.

Matsuyama, who romped to a five-shot victory in the WGC-Bridgestone Invitational on Sunday, has carried his majestic form from Ohio to North Carolina.

Two players were above Matsuyama in the pre-tournament betting – Rory McIlroy and Jordan Spieth – but both have flopped through the first 36 holes. Matsuyama, a best-price 12-1 at the start of the week, has become 7-4 favourite.

McIlroy is in a tie for 31st place, ten shots off the lead, while Spieth has even more work to do over the weekend from a further shot adrift. McIlroy is 70-1 to fight back and triumph, while Spieth is 200-1 to become the youngest player in history to complete a career Grand Slam of Majors by winning the USPGA.

A few players have to complete round two on Saturday, with thunderstorms having caused a suspension of play on Friday afternoon, meaning darkness stopped play. The cut is projected to fall at five over par, meaning Justin Rose and Sergio Garcia are packing their bags.

The stand-out 7-4 about Hideki Matsuyama which Betfred were dangling early on Saturday morning was quickly gobbled up and it is entirely understandable that punters are desperately trying to jump aboard the Oriental Express.

The quality of the golf Matsuyama has produced in the final round of the Bridgestone Invitational and the second round of the USPGA suggests this is a player at the peak of his powers. There certainly looks scope for the formhorse to run away from another elite field.

Matsuyama will be delighted with the way the other big names in attendance have flopped at Quail Hollow and the content of the leaderboard will thrill his backers. Jordan Spieth (11 shots behind), Rory McIlroy and Dustin Johnson (both ten shots behind) have enormous weekend deficits to overcome. Surely their race is run.

The big question regarding Matsuyama on tournament-eve was whether he could handle the pressure at the age of 25 of becoming Japan's first Major champion? The pride of China, 30-year-old Ding Junhui, has never won the World Snooker Championship and immense pressure comes with being the leading sportsman of a developing sporting nation. Japan has a truly world-class golfer for the first time and 127 million people are willing him on at Quail Hollow from afar.

The way the USPGA is going, though, Matsuyama might be able to get one hand on the trophy before any final-round nerves kick in. This looked an ultra-competitive event ante-post, but with so many star names underperforming, the task for Matsuyama has become so much easier.

Jason Day has been hugely inconsistent this season and will probably struggle to sustain his early pace, while Kevin Kisner's lack of punch off the tee could see him bullied by Matsuyama in the final group.

Rickie Fowler, Justin Thomas and Brooks Koepka are close enough to apply some heat on Matsuyama with third-round fireworks. The talented American trio are still in the hunt, but have not got much margin for error. The assurance of hotshot Hideki means those in the chasing pack need to produce near-perfect Saturday golf to set up a Sunday title chance.

In-running punters looking to get involved at this stage are advised to back Matsuyama at 17-10 if they have deep pockets, or Fowler at 12-1 if they want to take a chance on the player most likely to emerge from just off the pace to throw down a title challenge.

The third-round draw will be made once the second round is completed. Another hot, humid day lies in store, with another thunderstorm possible. Hardly any breeze is forecast.