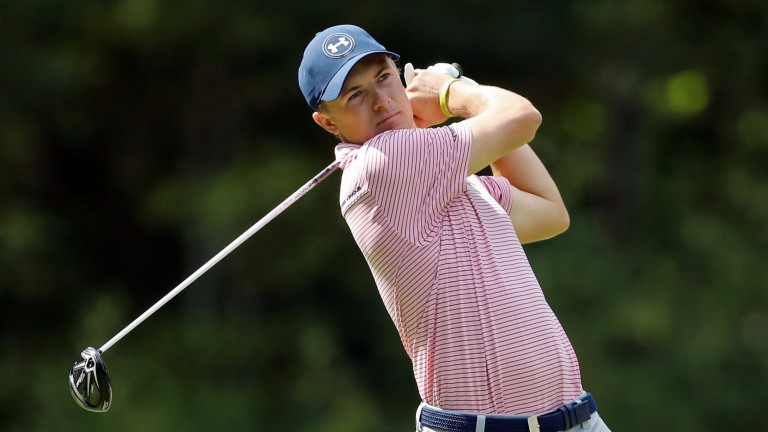 During the SBS Tournament of Champions in Kapalua last week, a top-class animal worked off some rust in his seasonal reappearance, and Jordan Spieth seems likely to find his gallop quicker in the Sony Open at Waialae Country Club.

Spieth was sharper than most at Kapalua – many in the field were clearly not ready to resume competition – but a first-day 72 left the former world number one playing catch-up from the off. The Texan delivered a barrage of birdies over the next three days, but a trio of disaster holes denied him victory.

Two double-bogeys on par-threes and a triple-bogey at the 17th in round two wrecked Spieth's Kapalua hopes, but he made 26 birdies and an eagle to show he is generally in fantastic nick. An eight-under-par final-round 65, a score nobody in the field bettered all week, hauled Spieth to third spot and sent him to Waialae full of confidence.

It would come as a huge shock if Spieth fails to contend in the second leg of the Hawaii Swing, particularly to the man himself, who could not disguise his excitement about the state of his game in post-round interviews.

Spieth suffered some miserable luck at Kapalua, particularly with his tee-shot at the par-three second hole in round three, which plugged so badly under the lip of a greenside bunker that he had to take a penalty drop. With more fortune in the Sony, 7-1 could look a massive price.

Spieth is one of 24 Sony hopefuls who have the advantage of a competitive Hawaii spin already under their belt. History has shown that ridding the Christmas decay with four rounds at Kapalua aids a Sony title tilt.

In the last 18 years, the US Tour has opened at Kapalua before moving to Waialae, and 12 Sony winners played in both events.

Not all of the tiny ToC field stay in Hawaii for the Sony, so 12 from 18 is a compelling statistic when you consider only about 15 percent of the Sony runners arrive from Kapalua.

Those making the short hop from Maui to Honolulu are usually good players who would expect to do well in the Sony, but even so, punters should favour those who already have already had a 2017 outing.

Spieth missed the cut by two shots in his only previous Waialae start (2014), but the debutant had only one low-grade US Tour title in his locker. He has since become a two-time Major champion, a winner in Hawaii (last year's ToC), and can thrive this time on a course where his driving-distance weakness is an irrelevance.

Hideki Matsuyama must be respected, but the Japanese ace will have been disappointed with the way he performed in the final round of the ToC. Aside from a chip-in for eagle at the 14th hole, Matsuyama was well below the level which has won him four tournaments in three months. The purple patch may come to an end on a track where his form figures are MC-MC-MC-78.

Next best
Billy Horschel 50-1
Two players who are making their first start of the year appeal as big-price each-way back-up to Spieth. Both Billy Horschel and Marc Leishman were active enough in the tail of 2016 to suggest neither will need long to hit their stride in Hawaii.

Horschel threw himself into a determined close-season practice and fitness regime after missing a two-foot putt in a playoff for the RSM Classic at the end of November. The 2014 FedEx Cup champion seems extremely pumped-up and optimistic about the months ahead, having produced some great golf at the end of last year.

Waialae has not been a regular port of call for Horschel – he has only ever competed there as a US Tour maiden – but the confident Floridian is desperate for action and the course suits.

Other selection
Marc Leishman 66-1
Leishman competed last year to the first week of December, finishing 21st in the Australian PGA. He was fifth in the CIMB Classic at the end of October and can bolster a strong Sony record this week. The 2012 Travelers Championship winner has Sony form figures of 12-20-27-9-5-37-28.

The lack of Sony fireworks last year from Leishman was probably due to the fact he was making his first competitive start with new clubs and ball, having just switched from Titleist to Callaway.

Expect more birdies this time. Spieth, Horschel and Leishman are all comfortable playing in a breeze, so the forecast for a windy Sunday at Waialae will not worry any of them.

Others to note
Charles Howell
Chucky finished last season in solid form and has an excellent Sony record, twice finishing runner-up and sharing third in 2005.

Hudson Swafford
Howell and Swafford can threaten the places. Swafford has made 17 cuts in a row and has finished in the Sony top ten in two of the last three years.

Zach Johnson
The former Masters and Open champ has won both Hawaii events – Sony in 2009 and ToC in 2014. Arrived early on the islands, eager to make up for winless 2016.

Justin Thomas
This improving powerhouse won the ToC on Sunday. He is the joint course-record holder at Waialae, having fired a second-round 61 en route to sixth place in 2015.

Jimmy Walker
In a bid for more driving accuracy Walker will play with a shortened driver this year. He has a fantastic Hawaii record and won Sony by nine shots in 2015.

Justin Rose
The Olympic champion continues to be blighted by back problems. He has not played Sony since 13th place in 2011. Paul Casey may lead the English challenge instead.

Course overview Waialae staged the Hawaiian Open until 1998, at which point US Tour chiefs oversaw an upgrading of the track, which became the venue for the Sony Open thereafter.

Waialae contrasts greatly with the wide-open Plantation Course which the likes of Jordan Spieth and Justin Thomas faced for the Hyundai Tournament of Champions in Maui last week.

The fairways are thin, the greens are small and accuracy is the key to success. The Hawaii turf and the trade winds are similar to Kapalua though. A steady breeze usually adds to the Waialae test and the most difficult holes are the 488-yard par-four first, the fiddly 426-yard par-four second and the 478-yard par-four 13th.

There are only two par-fives (the ninth and 18th). The winning score was between 13 and 16 under par for six years until red-hot rookie Russell Henley destroyed the course record by four shots in 2013

Weather forecast Sunny with light breezes for three days, before strong winds arrive for the final round