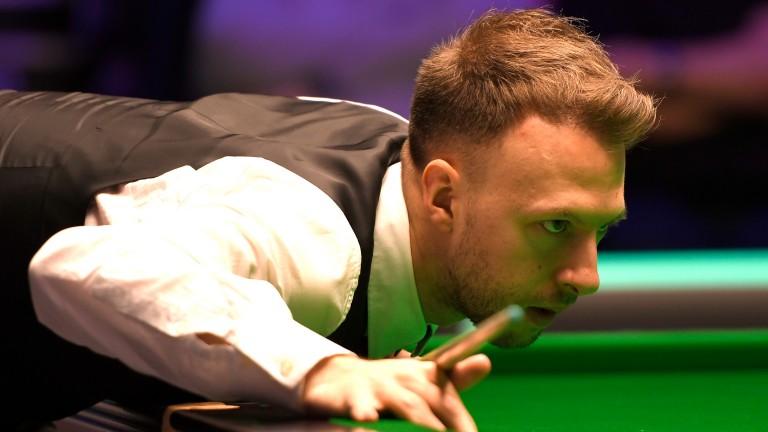 Judd Trump is a long way clear at the top of the rankings and is the man to beat in the Masters after a well-earned Christmas break
George Wood
1 of 1
By Adrian Humphries UPDATED 5:14PM, JAN 9 2021

The competitive nature of snooker these days means that the Masters seldom offers up draws which outright punters can be confident about, but this year's grand annual top-16 invitation tournament feels tougher than ever.

The Betfred-sponsored show has had to up sticks from north London's Alexandra Palace in favour of the Milton Keynes Covid bunker this year and no fans will be allowed to enter the Buckinghamshire bubble due to the current lockdown.

Ronnie O'Sullivan, who already holds the record for titles in the Masters, is chasing an eighth win and there aren't many who are playing better than the Rocket right now.

He showed in last year's Betfred World Championship that his focus is as good as ever when it needs to be, but while that principal target was achieved in tip-top style there may just be one or two to stop O'Sullivan in the coming days.

An opener against Ding Junhui is no gimme either, particularly as the Chinese number one has been showing signs that his game is on the up once again.

Ding himself could become a major runner if upsetting the Rocket, but the 2011 Masters hero would still be an outsider were he to come up against world number one Judd Trump in the semi-finals.

Trump played some blinding snooker in the first half of the season and showed that on his day he's head and shoulders above anyone else on the planet these days.

In the chasing group are O'Sullivan, Betway UK champion Neil Robertson and European Masters and Scottish Open winner Mark Selby. Robertson and Selby are in the top half of the draw but in the same quarter – the second – so Yan Bingtao and Stephen Maguire, in particular, look to have their hands full in this event.

Defending champion Stuart Bingham is rewarded with a berth in the weakest quarter of the draw along with former champions Shaun Murphy and Mark Williams and rank outsider Thepchaiya Un-Nooh. The nippy Thai is difficult to fancy in this grade.

Kyren Wilson, runner-up to Mark Allen in the 2017 Masters, is not without a chance of going one better, but the Warrior's first-round opponent Jack Lisowski is showing signs of greater consistency and self-belief this season and can trouble the sixth seed. Wilson is playing well, though, and was in decent century break-making form in the Championship League this week.

But whoever comes through this tough battle may well face English Open, Northern Ireland Open and World Grand Prix hero Trump in the last eight. The Ace in the Pack should have too much in his opener for Dave Gilbert, who has not been at his best in recent months. And while Wilson has worried Trump before and Lisowski may gradually be catching up his best friend on the circuit, the Bristolian needs to improve his figures in the Masters and add to his solitary title in 2019.

John Higgins won this tournament in 1999 and 2006 but has tended to underachieve when the event was held in London. The move to Milton Keynes may help the Scot, who continues to play well and reached the first two group playoffs of the Championship League this week. But Higgins, who made a 147 maximum break at the Crucible last year, is often better backed in highest-break markets these days.