Tips, odds and betting for the Ladbrokes Scottish Leagues 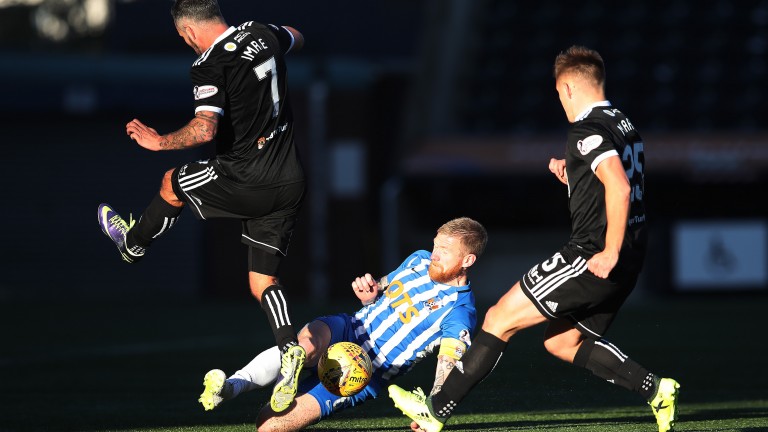 Kilmarnock remain in a battle for a European spot and they can record a valuable victory in the race for third position in the final game before the split in the Ladbrokes Scottish Premiership against St Johnstone.

The Ayrshire club have enjoyed a remarkable season under manager Steve Clarke, who is favourite to be the next Scotland boss and has been working wonders with a fraction of the resources available to the Old Firm, Aberdeen, Hibs or Hearts.

Finishing third is certainly an achievable aim for Clarke’s men and they look a solid bet to see off the Saints.

Killie came through a sticky patch to wallop Hamilton last week before outplaying Hibs at Easter Road in midweek which should have gained them three points.

Saints did beat rivals Dundee in midweek, but it’s been a terrible year for Tommy Wright’s men, who collapsed when it looked as if a top-half finish was nailed on.

They’ve lost nine of their last 12 games and could struggle at Rugby Park.

Falkirk can get the better of Alloa in a pivotal relegation scrap in the Ladbrokes Championship.

Ray McKinnon’s side are four points ahead of the Wasps, albeit having played a game more, and a home win here could be invaluable in the race for survival in the second tier.

The Bairns have lost just once this year , at leaders Ross County, but too many draws have cost them their chance to move clear of the drop zone.

McKinnon has plenty of options at his disposal after a busy spell in the January transfer window and although they have been punching above their weight all season, Alloa’s part-time status looks sure to catch up with them eventually.

Back Falkirk to take a giant leap to safety.

It’s not just in the Championship where there is a huge relegation dogfight, and St Mirren are fancied to edge out Hamilton in a game that could have a significant bearing over who remains in the Premiership.

Oran Kearney’s Buddies beat bottom-placed Dundee last week in a game of similar standing and, having rested players in the midweek defeat to Celtic, the visitors should be primed to take another step towards survival.

Hosts Accies appear to have lost the asset they treasured most recently - they have been lacking fight. They went down to a tame defeat in midweek to a Livingston side who had little to play for, and could be outbattled by a Saints side who have tightened up at the back and believe they will avoid the drop.