Plus, Bayern Munich win at Chelsea suggests Germany's got talent 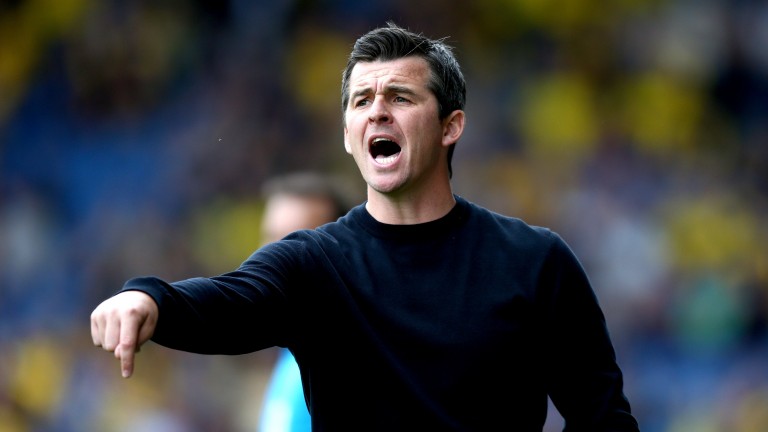 Joey Barton hit the headlines following his outburst earlier this week but his Fleetwood side can let their football do the talking at Tranmere.

"You'd rather come and pay to watch us than them," said former Newcastle man Barton after Sunderland grabbed an injury-time equaliser in Tuesday's 1-1 draw. "We are miles better than them. They play hoof-ball and drenched the pitch to slow it down because they were scared of little old Fleetwood Town."

Barton may not find the pitch to his liking at Prenton Park either, but if the Cod Army can deal with the conditions then they should be able to show just why there is a 29-point gulf between the sides in Sky Bet League One.

There are many reasons why Barton should be bullish.

Fleetwood have lost just one of their last 15 league games and that decent draw at Sunderland ended a five-match winning sequence.

February results have included wins over top-six outfits Peterborough, Portsmouth and Wycombe as well as the point at Sunderland. They have also drawn with Coventry and Barton welcomes back Ched Evans following a three-match suspension.

Barton can stress the "small Fleetwood Town" angle all he likes, but he has good players on decent money with Glenn Whelan and Paul Coutts in midfield and Barrie McKay should prove to be a shrewd loan signing from Swansea.

Tranmere, five points from safety, beat Shrewsbury 3-2 on Tuesday to increase their survival chances slightly but before that Rovers had collected three points from a possible 33 since Christmas.

If it's looking tricky for Tranmere then it's definitely bleak at the bottom of League Two for Stevenage, eight points adrift and on their fourth manager of a sorry campaign.

Alex Revell is the latest coach to try to turn Boro's fortunes around, but he was unable to avoid a seventh straight defeat as they went down 2-0 at Crawley last week.

Revell's side had plenty of possession - 61 per cent - which is an enormous improvement on a seasonal average of just 48 per cent.

However, Crawley hit the woodwork twice and still ran out cosy winners so it's difficult to fancy a Stevenage side with one victory in the league since the start of November.

Stevenage are by far the lowest scorers in the division with just 23 goals and Walsall should be favourites.

It's been a disappointing season for 15th-placed Walsall and a six-game losing sequence earlier in the season put boss Darrell Clarke under pressure, but his side have responded well.

Walsall obtained 15 points from the opening 17 games and the subsequent 18 fixtures have resulted in a 29-point return.

If the second half of the term is a true reflection of Walsall's ability (1.61 points per game) that would be 74 points over the campaign.

You'll get no prizes for guessing Paris St-Germain are going to win the French title and Marseille are looking good for second spot, but the last Champions League qualification spot has the promise of a fight until the end with seven points separating third down to 11th.

Two of those in the scrap - Nantes and Lille - meet on Sunday and the visitors are fancied to come out on top.

Lille have won four of their five February league fixtures. The exception was a 2-1 home loss to Marseille which may be explained by the absence of crack centre-back Gabriel.

The highly-rated Brazilian defender has missed five matches this season in Ligue 1 - three defeats, one draw and a win, coincidentally against Nantes on the opening weekend of the season.

On that occasion Victor Osimhen announced himself to the Lille public with a two-goal debut performance and he has since moved on to 17 for the season.

Nantes have triumphed in only two of their seven league matches in 2020 and were flattered by last week's 3-1 success at Marseille.

Banker
Leeds United 1-2
Hull, 250-1 for relegation on transfer deadline day, have sunk to 6-1. The Tigers, who sold key men Grosicki and Bowen, have collected two points from the last 27 and should be outclassed by Leeds.

Blowout
Reading 6-5
The market has always suggested Barnsley were better than the table suggests and they look lively outsiders against out-of-form Reading following a run of three straight wins to nil.

Bayern Munich's marauding Canadian left-back Alphonso Davies stole the show in this week's Champions League as the German side crushed Chelsea 3-0, but something else also caught the eye on Tuesday.

Marc-Andre ter Stegen made a crucial, excellent save for Barcelona in their 1-1 draw away to Napoli at the same time as Jerome Boateng and Thomas Muller were playing decisive parts in Bayern's domination at Stamford Bridge.

None of those three will start for Germany at Euro 2020 - indeed Muller and Boateng have been axed from the squad entirely - which leaves you wondering just how good Joachim Low's side must be if they can leave out players of that quality?

Unless World Cup-winning coach Low has got it hopelessly wrong he must believe there is plenty in the tank and - without looking at the tournament too in-depth at this stage - odds of 8-1 (double that of England in places) are worthy of at least a second look.

Germany are in a tough group with France and Portugal but both matches are in Munich. If they can top the section a third-place qualifier awaits in the last 16 before a quarter-final which the market anticipates will be against Croatia or Poland.

Don't write off the Germans.