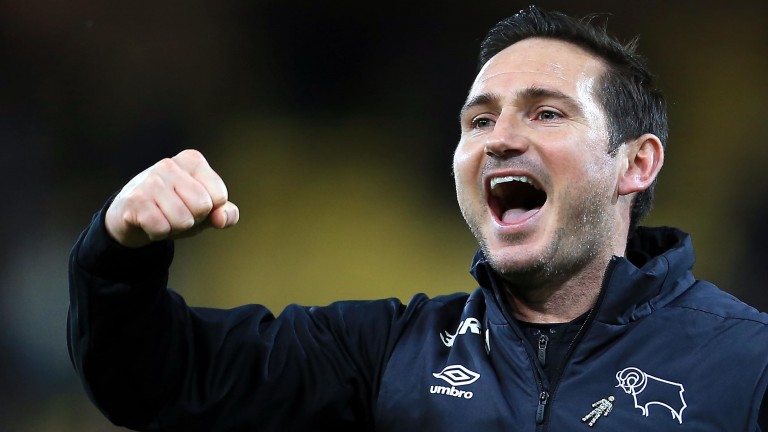 Within the next few weeks bookmakers will start heavily factoring in the desire of teams to win but for now there could be an opportunity to back teams with more at stake.

Take Brentford v Derby at Griffin Park as an example.

The Sky Bet Championship mid-table hosts have little to play for whereas seventh-placed Derby are desperate for the points - it does not mean the Rams will win, but at least their motivation can be taken as a given without having to pay a premium, as we will later in the season.

Derby have played fairly well in recent weeks, deservedly beating Wigan before having the better of home draws against Sheffield Wednesday and Stoke. That was followed by last week's crushing 6-1 demolition job on Rotherham.

"I don't think 6-1 flattered them," said Rotherham boss Paul Warne, and it was probably no coincidence the performance coincided with a return from injury of Mason Mount.

The midfield magic of Mount will be key for County's promotion following two months on the sidelines.

Brentford have gone four games without a goal and their performances have dipped.

Losing 2-0 at Sheffield United is no disgrace but the Blades played 55 minutes with ten men. They were better in the 1-0 loss to West Brom at Griffin Park and tend to do their best work at home, but still the Bees must be disappointed with a return of one shot on target in the last two matches at Wigan and Swansea.

Bristol City followed an excellent win at Bramall Lane by defeating Middlesbrough at the Riverside and the Robins should be backed to see off relegation-threatened Wigan.

The Latics have been travel-sick this season, winning only once and that came way back in August. Since that success at Stoke Wigan have a record of played 18, lost 15 drawn three.

Playing on Wednesday and Saturday is never ideal, particularly after a 3-0 defeat, and Accrington could struggle to raise themselves following their midweek loss to Sunderland.

AFC Wimbledon are no Sunderland, but they are relishing the relegation humdinger in Sky Bet League One which sees just three points separating Rochdale in 23rd from 16th-placed Bristol Rovers.

A win for the Wombles would see the 22nd-placed hosts jump above Stanley and they look in much better shape.

Wally Downes has led Wimbledon to four wins in five, results that include successes over Doncaster and Peterbororough, with James Hanson scoring twice in last week's victory at Scunthorpe.

Accy, who have won just twice in the league in 2019, are on a run of six defeats in seven games.

Nicky Ajose's season-ending injury isn't a disaster for Mansfield with Danny Rose returning, but the forward will do well to oust CJ Hamilton and Tyler Walker from David Flitcroft's front two.

The duo bagged braces in last week's 4-1 win at Exeter and this is a massive match for fourth-placed Mansfield, who will be aiming to force their way into the top three while MK Dons tackle leaders Lincoln.

Cambridge's 3-0 victory at Bury on Tuesday reads as though it was one of the best results of the season. However, without wishing to pour cold water on Colin Calderwood's Cambridge revolution, they were facing opponents who had not been paid.

Banker
Swindon 4-6
Swindon have scored seven goals in their last two matches and take on a Yeovil side on a run of 11 defeats in their last 13 games. The Glovers have lost their last seven away fixtures.

Blowout
Brentford 21-20
Despite being a strong home side, Brentford have failed to score in their last four matches and they could be vulnerable against a Derby side boosted by the return from injury of Mason Mount.

"I'm so pleased for Sol,” said Cardiff manager Neil Warnock after Sol Bamba scored a late winning goal against Brighton in November. "He’s come here on a free transfer and from day one has been an absolute breath of fresh air."

There's nothing wrong with that at all, only Bamba was offside when he scored, so given the fuss Warnock made following the defeat against Chelsea last week it's slightly surprising that the veteran boss wasn't trying to offer Albion some kind of rematch.

It appears Warnock (and most other managers) only want justice when they have been wronged rather than fair sport for everyone at all times, and he also reckons matches are decided by "who you get in the middle and who has a flag".

Referees make mistakes. They always have and they always will, but so do players and managers, and the idea that Cardiff will be relegated because of poor officiating just doesn't ring true.