MK Dons can give their backers an early Christmas present 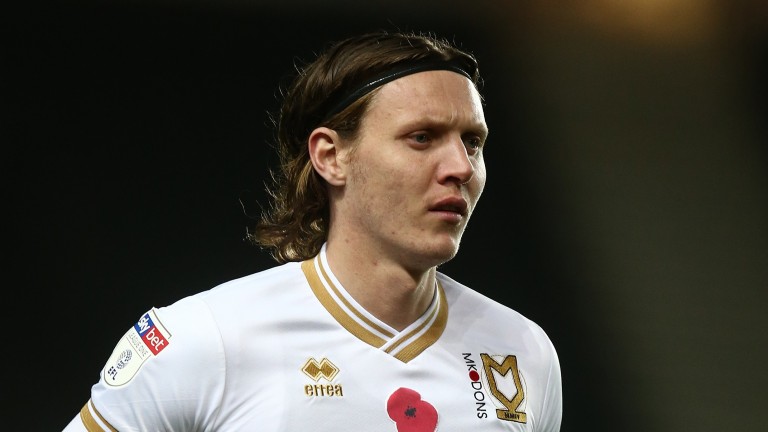 It's been a miserable season for MK Dons back in Sky Bet League One but there could be some Christmas cheer to come in Kent when Russell Martin's men travel to Gillingham.

There was talk of a sneaky second promotion push in the summer  and four wins in the opening seven matches only added fuel to those ambitions.

Then came the worst run in their history - no laughing in the cheap seats for the team labelled Franchise FC by fans opposed to their reincarnation from Wimbledon - with an 11-game league spell which resulted in ten defeats, plus a 0-0 draw with a Coventry team who missed a penalty.

Paul Tisdale was sacked during the depressing period and Milton Keynes are still stuck in the relegation zone alongside crisis-clubs Southend and Bolton.

However, in more recent times the Dons have sorted themselves out. Maybe it was the appointment of Russell Martin to replace Tisdale or more likely it was the return of players such as Joe Mason as the previous regime fought a difficult injury list.

MK Dons are unbeaten in three, beating Oxford and drawing at Doncaster in the league as well as overcoming Coventry in the EFL Trophy. Before that they had lost three successive fixtures right at the death, suggesting confidence was a major problem.

That may have been overcome, and with key players returning it could be that MK Dons are flying under the radar.

Mason has scored three goals in four matches and Rhys Healey, back in the squad for the 1-0 victory over Oxford, adds further firepower.

Gillingham are having a respectable campaign in 13th spot and that looks about their level.

Ordinarily a shade of odds-on at home to a relegation candidate would be the right price but it could be argued that circumstances rather than ability have dictated MK Dons are in the bottom three.

Bradford will be hoping to make full use of home advantage over the festive period with three of their next four games at Valley Parade and the Bantams can start in the right fashion against Salford.

Gary Bowyer's side were not great at Leyton Orient in a drab 0-0 draw last week, although they did not allow a shot on target and made it successive clean sheets following a 1-0 win over Newport.

Bradford have a strong home record with seven league wins this season and the return of Matty Palmer alongside Callum Cooke gives them a touch of class in midfield.

Salford were among the ante-post favourites for League Two as bookmakers understandably approached them with caution given their rich ownership. Manchester United's Class of 92 and billionaire Peter Lim may not be delighted with the current mid-table return, however.

They nearly made a mess of promotion from the National League and have not scored for three matches. Salford have also lost all six of their matches against sides in the playoff positions.

The winter weather in Pamplona is not typical of what Brits abroad would expect of sunny Spain and a December trip for La Liga outfits is definitely not welcomed by outfits based in the south.

Osasuna use that uncomfortable chill and often rain to form part of an uncomfortable package for visiting outfits but the Basque boys are probably better suited than most to stand up to the physical offering served up by the hosts.

Real Sociedad's only league defeat in the last six came at Real Madrid and they harbour genuine hopes of qualifying for the Champions League following another strong performance in last week's 2-2 draw with Barcelona.

Banker
Bradford 4-5
The Bantams tend to punch at their weight at home and can see off a Salford side who have disappointed since gaining promotion from the National League given their financial power.

Blowout
Oxford 6-5
United put in a fantastic effort against Man City before losing on Wednesday, however, this is a quick turnaround and visiting table-toppers Wycombe have lost just one league match this season.

Danny Baker said last week: "All I can quote is my old man, a chronic gambler. Before any race he'd tell you why a certain horse could not lose and afterwards explain exactly why it did."

So here's a quick guide to the Champions League last-16 draw with the excuses to follow in March.

Real Madrid v Man City
If Aymeric Laporte is fit City will win. If he isn't City will still win but it will be closer.

Atletico Madrid v Liverpool
This feels a bit tighter than the odds suggest. Atletico's defensive nous can make this tricky, although the Anfield factor is decisive.

Tottenham v RB Leipzig
A genuine 50-50 tie which begs the question – even though neither will lift the trophy, why are Leipzig double the outright price of Spurs?

Dortmund v Paris St Germain
Dortmund don't have a great defence so this should be a PSG success in the Thomas Tuchel derby.

Napoli v Barcelona
Here's how this one goes: Napoli outplay Barca at home but don't get a big enough lead to hold on at Camp Nou.

Atalanta v Valencia
Let’s save the best bet until last – Atalanta at 13-10 to qualify.