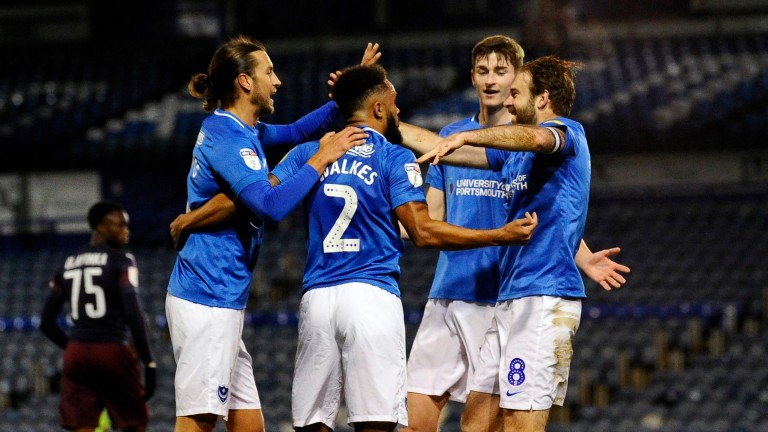 Free football tips, bets accumulators and analysis for the EFL and Europe.

Portsmouth have been one of the biggest disappointments of the season, but Kenny Jackett's side can build on Tuesday's 1-0 win over Lincoln with another positive result at Bristol Rovers.

Pompey have games in hand on their rivals having played just 12 times, which partly explains their 16th spot in Sky Bet League One. The other issue is that they have scored only 13 goals, but John Marquis was on target in the midweek success which will no doubt be a major confidence boost to the summer signing.

The game before had seen Portsmouth somehow lose 1-0 at Wimbledon despite having 64 per cent possession and 22 shots, of which ten were on target and 14 were inside the penalty area.

They dominated without finding a path to goal, but defensively Pompey are fine with only three goals conceded in their last five matches and one goal could be enough against Rovers.

The hosts have scored just once in the three matches they have played since losing star striker Jonson Clarke-Harris to injury, going down 2-0 against Doncaster and Bolton in the last two.

Clarke-Harris has scored seven of Rovers' 15 league goals and is one of the most influential players in the division, as he showed last season by keeping the Gas in the third tier.

Rovers' win rate drops from 60 per cent with Clarke-Harris to 25 without him this season.

El Clasico has been postponed but the Devon derby is just as important to the locals who would rate Exeter versus Plymouth as the biggest match in world football.

There is more than just pride at stake with both clubs having their hearts set on promotion from Sky Bet League Two, and Plymouth look a value punt to beat their arch-rivals.

Exeter have suffered a dip with two wins in their last eight league games and one of those, a 1-0 success over Forest Green, was a touch fortunate.

They have since been thumped 4-0 at Cambridge and 3-1 at Scunthorpe, which is not the best kind of form to come into a game of this magnitude.

Plymouth are heading in the other direction. They have gone five league games unbeaten, a run which includes a road success at Mansfield and a deserved point from a difficult contest at Swindon.

That Swindon show hinted at better things to come and Ryan Lowe's passing outfit have since beaten Carlisle and Leyton Orient by an aggregate 6-0.

George Cooper is turning on the style and Argyle's strength in depth was shown by Danny Mayor getting only 26 minutes against Orient on Tuesday.

Odds-against prices about Leeds need to be snapped up almost blindly in the Championship. It does not happen often and despite this being a tricky game, United are the best side in the division and usually dominate opponents from the first whistle.

Marcelo Bielsa's side have gone three matches without a win on the road, however, they dominated every statistic in their 1-0 loss at Charlton apart from the score and were on the wrong end of a shocking refereeing decision at Millwall.

The game was up inside 15 minutes through a penalty and Gaetano Berardi's red card - which was later rescinded - while Patrick Bamford missed a number of chances in the 1-1 draw at Preston.

Sheffield Wednesday are third, only one point behind Leeds, but they have possibly been aided by a nice fixture list which has seen the Owls play only three matches against teams currently in the top half.

Two of those, against QPR and Preston, ended in defeat and the distance between the Yorkshire rivals could be large by the end of the campaign.

Banker
PSG -1 handicap 4-6
It's the biggest game in France but there is a big class differential between PSG and Marseille. The Paris hosts have won their last three at home to OM by an aggregate margin of 9-1.

Blowout
West Brom 4-9
Albion have had an extra day of rest but Charlton have beaten Leeds and drawn against Nottingham Forest and away to Fulham, so this is unlikely to be a stroll for table-toppers West Brom.

I walked through my front door on Monday evening to pandemonium in Langdon towers. My son in anger had slammed shut the sliding door on my daughter's loft bedroom for some reason, knocking it off the runner and trapping my wife and daughter.

With the aid of a call to my dad, a shovel and brute(ish) strength I eventually opened it just enough for them to squeeze out after a lengthy period with sweat pouring when my wife helpfully apologised for forgetting to tell me the heating had also been on full blast.

It felt like a cruel edition of The Crystal Maze, but maybe not as cruel as Arsenal fans being stuck with Unai Emery.

I didn't manage to watch a kick of Arsenal's 1-0 defeat to Sheffield United due to the broken-door adventure, however, it does not feel like that mattered too much in assessing the performance as we have seen it all before.

One of the main reasons for getting rid of Arsene Wenger was to bring a freshness to the club but Emery is serving up the same old guff, particularly in away matches.

Emery does not look capable of improving Arsenal by enough to get them competing for major titles and they may well need to make another change next summer.