Marco Silva's Toffees could put Saints in a sticky situation 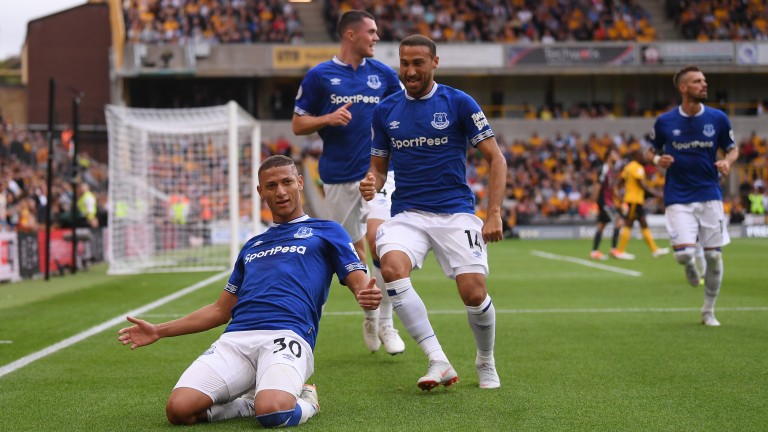 Everton v Southampton
Southampton struggled for consistency on their travels last season and their away woes could continue when they visit Everton.

The Saints tasted league success just three times on the road last term as they laboured to a 17th-placed finish and a goalless draw at home to Burnley last weekend has done little to suggest immediate improvement is expected.

Everton’s five league defeats at Goodison Park in 2017-18 all came against top-seven sides and they look significantly stronger with Brazilian sensation Richarlison leading their attack.

Key stat
Southampton conceded two or more in nine of their 19 away league games last season.

Leicester v Wolves
Leicester deserved at least a point from their opening day trip to Old Trafford and can make amends with victory over Wolves.

Claude Puel’s men suffered a 2-1 defeat at Manchester United but there were plenty of positives to draw from their efforts as they enjoyed 54 per cent possession and won the shot count 13-8.

James Maddison shone on his debut and Jamie Vardy’s expected return to the starting 11 can help them overcome a Wolves outfit who may need time to show their best having been held at home to ten-man Everton last weekend.

Key stat
Leicester have avoided defeat in their opening home Premier League game in each of the past four seasons.

Tottenham v Fulham
Tottenham didn’t have things all their own way when winning 2-1 at Newcastle last weekend and they can expect another tough test from an attack-minded Fulham.

Spurs conceded in home league games against West Brom, Stoke and Southampton – three of the bottom four – last season and Fulham look to have more quality on offer than those with Aleksandar Mitrovic, Ryan Sessegnon and Andre Schurrle spearheading their attack.

But the visitors still have to prove themselves defensively and are unlikely to keep a clinical Spurs at bay.

Key stat
Fulham conceded in 18 of their 24 away league matches last season.

West Ham v Bournemouth
West Ham were dealt a harsh lesson by a ruthless Liverpool on the opening weekend of the season and are no good things to respond at home to Bournemouth.

The Hammers have seen a massive overhaul in personnel over the summer and it may take time for Manuel Pellegrini’s new talents to get used to life in East London.

Bournemouth, however, are much more settled. They hit the ground running with a 2-0 win over Cardiff and can build on that.