Marco Silva sacking has got to hurt Watford's confidence 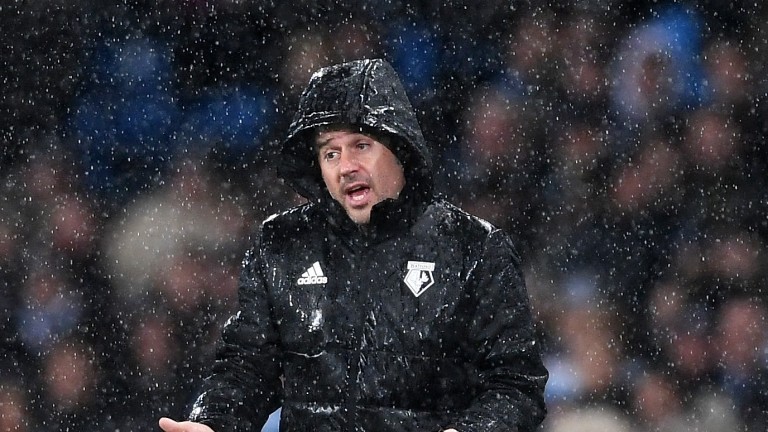 Best bet of the weekend
Southampton to beat Watford. The Hornets are in something of a crisis and sacking your manager every few months can’t help.

Confidence has got to be low as they prepare to go to Southampton, another side in desperate need of a win.

Mauricio Pellegrino’s side haven’t looked that bad in recent weeks and were well worth a point against Spurs last Sunday. Their luck will turn soon enough.

Most vulnerable favourite
I’d have no qualms about taking on Huddersfield at home to Birmingham.

Huddersfield’s narrow win at Bolton in the last round was their only success this side of Christmas and their last two defeats – against West Ham and Stoke – have been poor.

Birmingham are definitely improving under Steve Cotterill – they’re on a run of one defeat in five – and they can avoid defeat at Huddersfield.

Were Watford right to sack Silva?
Getting rid of managers on a whim is becoming a common theme at Watford. I know results weren’t great but this is a club who were thrilled to have Silva as their boss just a couple of months ago, and everyone seems to rate him.

I’m not sure I quite understand what Watford’s expectations are, but let’s just say they are higher than everyone else thinks of them.

What do you make of the Nations League?
Initially I thought it was a ludicrous piece of nonsense that I would have no interest in.

But that was a lazy response to something innovative. So I’ve studied it, looked at it, tried to embrace it – and quite frankly I still don’t get it.

Anything that replaces meaningless friendlies isn’t a bad thing, but seriously, do we need another international competition? Players will treat it like friendly football and I can’t see it flourishing.

Early thoughts on the League Cup final
Lay Manchester City over 90 minutes. It’s City’s to lose, of course it is, and they are by some distance the best team in England.

But one-off games are exactly that and it’s why cup winners change from season to season.

Arsenal under Arsene Wenger may not have won a League Cup but they’ve monopolised the FA Cup over the past few years and that shows what a good team they are in one-off games.

Give us a midweek winner?
Newcastle against Burnley. Everybody is raving about Burnley yet only two teams in the Premier League have scored fewer goals than them.

Gutsy they may be, but clearly they aren’t that exciting to watch and are currently on a terrible run.

They are the type of opponent Newcastle should be happy to welcome to St James’ Park and I fancy Rafa’s boys to see them off.