Marauding Danes could prove a great bet to rule the world

Kjeldsen and Olesen should be a supreme team 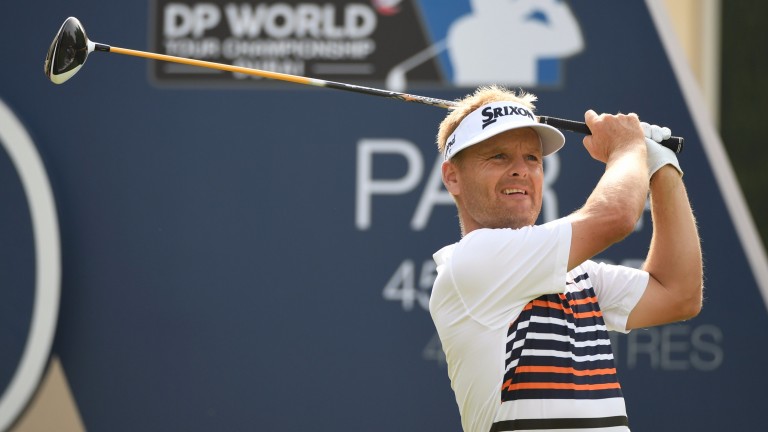 Soren Kjeldsen of Denmark tees off at the DP World Tour Championship
Ross Kinnaird
1 of 1
By Steve Palmer 8:20PM, NOV 22 2016

Live on Sky Sports 4
from 1am Thursday

Palmer’s top tip
Denmark 22-1
Graeme McDowell started this week trying to explain why such a decent field has been attracted to the traditionally low-key World Cup of Golf, citing the quality of the venue and the return to a more team-based format as reasons.

The truth, though, is that the prize money is significant enough to mean only those who eat from the very top table in golf can afford to miss out on a guaranteed payday in a no-cut event in the Australian sunshine.

The season is winding down with Christmas looming, but motivation will not be an issue for the 28 two-man teams in attendance at Kingston Heath Golf Club, with heavy financial rewards added to the patriotic fervour.

The best bet to bring home the meatiest of the bacon is the Danish duo of Soren Kjeldsen and Thorbjorn Olesen, who seem almost certain to gel well and have arrived in the Melbourne sandbelt in solid form.

Kjeldsen and Olesen are both genial characters and good friends who should generate the perfect atmosphere for scoring. And given the way both performed in the DP World Tour Championship last week, birdies seem likely to be plentiful at Kingston Heath.

Kjeldsen signed off with an eagle in Dubai on Sunday, sharing fourth place, while Olesen carded four decent rounds for 19th spot. At the start of the month, Olesen won the Turkish Airlines Open in convincing fashion, so confidence is coursing through the veins of two players who narrowly missed out on places in the European Ryder Cup side.

There is a lovely balance to the Danish pairing. Supremely accurate 41-year-old Kjeldsen can act as the team leader, churning out fairways and greens, while powerful and explosive 26-year-old Olesen can be more aggressive. The fourballs sessions should yield fantastic results, with Kjeldsen charged with chalking up the pars while Olesen goes on all-out attack mode.

The pair will devise the best possible plan for the foursomes to make sure Kjeldsen is driving for the tightest tee-shots. And, anyhow, Olesen’s driving has improved greatly in recent weeks since he switched to the TaylorMade M1 driver.

Nike’s decision to quit golf has freed up Olesen to put whatever he wants in his bag and he used just one Nike club (putter) when winning in Turkey. All the top players are using TaylorMade drivers. Brooks Koepka (Japan) and Matt Fitzpatrick (Dubai) won last Sunday having recently recruited a TaylorMade driver.

Olesen has winning form in Australia – he won the 2014 Perth International on the European Tour – while Kjeldsen was fourth in the 2002 Heineken Classic at Royal Melbourne and proved early in his career that he can perform well Down Under.

Next best
France 33-1
Victor Dubuisson failed to convert his final-round advantage in the DP World Tour Championship on Sunday, but the moody Frenchman has clearly got his mojo back and can lead his country into contention in Melbourne.

Dubuisson, third in the Nedbank Challenge before sharing fourth place in Dubai, controversially selected his friend Romain Langasque as his World Cup partner.

The highest ranked player who wanted to compete for his country was given his choice of sidekick for this event and Dubuisson overlooked Alexander Levy, Gregory Bourdy and Julien Quesne for Langasque. It could prove an inspired decision.

The selection process has caused a stir in many teams – England and Scotland especially – but Dubuisson is the sort of character who will not give two hoots about any criticism. He likes Langasque and is aware of the 21-year-old’s immense potential.

Langasque won the 2015 Amateur Championship, then finished 65th in the Open. His final outing as an amateur was in the Masters this year, where he tied for 39th place, a superb effort on his Augusta debut. Three runner-up finishes on the Challenge Tour this year helped earn this rising star a place on the European Tour for 2017.

Dubuisson, runner-up to Olesen in the 2014 Perth International, should enjoy his role as team chief and he has a talented young buck alongside him. Langasque could easily be French number one within a couple of years.

Other notables
Australia are a more than fair price at 5-1. Adam Scott struggled with his short-game in last week’s Australian Open, but the world number seven is a member of Kingston Heath and won the 2012 Talisker Masters there. Marc Leishman grew up in Melbourne and also knows this track like the back of his hand. The Presidents Cup teammates are worthy favourites.

Japan must also be respected at 8-1. Hideki Matsuyama and Ryo Ishikawa, both away from tournament golf last week, have got more practice rounds at Kingston Heath under their belt than any other team. Matsuyama has been in awesome form, while Ishikawa has been showing signs of his old magic.

South Korea are a decent each-way investment at 22-1 – Byeong Hun An and Kyung-tae Kim are a solid partnership – while Italy are tempting at 28-1. Francesco Molinari is in great nick, but Matteo Manassero appears to have lost a lot of the self-belief he built up with a short burst of form in the summer.

The rest of the field are unattractive prices. Thomas Pieters admitted last week that he was exhausted and is eager for the season to end, so Belgium’s powerhouse pairing may struggle on an unsuitable course, while England are playing under enormous pressure after all the hoo-ha surrounding Andy Sullivan’s selection.

Ireland should enjoy the track but have not been playing well, while Spain comprises two contrasting characters who may not get along.
Jimmy Walker has been poor since the USPGA and USA look terrible value, while Sweden are relying on Alex Noren providing yet more fireworks at the end of a glorious but draining four months. Noren may have one last hurrah in him, but the layers have got Sweden covered at just 12-1.

Denmark and France may jostle with Australia and Japan for World Cup glory on Sunday.

Course overview The Australian Open has been staged at Kingston Heath seven times, most recently in 2000 when Aaron Baddeley triumphed. The Australian Masters was at Kingston Heath in 2009 when Tiger Woods was victorious, and in 2012 when Adam Scott claimed the trophy. Dan Soutar designed the course, located in the famous Melbourne sandbelt region, in 1925. Kingston Heath is a classic layout, demanding pinpoint accuracy, which has stood the test of time. It has a mixture of long and short par-fours. The three par-fives run in the same direction, so any wind can have a significant impact on scoring. The track is typically firm and fast, although rain has taken some of the sting out this week

Story of 2013 A new format was introduced for the last World Cup, which was essentially a standard individual strokeplay event with the scores of two-man teams combined at the end to provide a team component. Jason Day won the individual title at Royal Melbourne, beating Thomas Bjorn by two shots, while Day and Adam Scott won the team event for Australia by ten shots

Weather forecast Melbourne has been soaked by heavy rain in the build-up to the tournament, but sunshine and hardly any breeze is expected to greet the World Cup hopefuls for round one. Clear, calm conditions are forecast for Friday and Saturday, with some light showers on Sunday

Type of player suited to challenge Avoiding the army of bunkers lining the narrow fairways is the key to success, so accurate drivers should succeed. The greens are typically fast and full of undulations, so excellent putting touch is required