Djokovic is still a work in progress after elbow injury 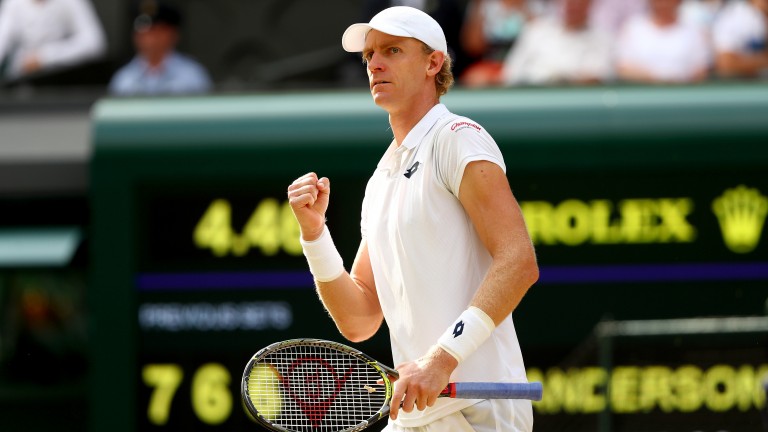 Kevin Anderson has the weapons to secure a semi-final spot
Matthew Stockman
1 of 1
By Adrian Humphries 8:00PM, JUL 14 2018

Kevin Anderson, who has made huge strides in the past 12 months, will bid to go again at Wimbledon after his marathon semi-final rumble with John Isner and the South African faces a tough task as he takes on three-time grass-court king Novak Djokovic.

There is hope for Anderson, however. He won their first meeting on a hard court ten years ago and, more importantly, claimed the first two sets in their most recent meeting, which came at Wimbledon in 2015.

Djokovic found enough to fight back that day and went on to rule at the All England Club for the third time.

But the super Serb may still not be firing on all cylinders as he grinds his way back to somewhere near his best and Anderson has never played better since reaching his first Grand Slam final at the US Open last September. So there is probably a case for siding with the outsider, who has tradition­ally been an unfashionable option for backers until stepping things up recently.

There is obviously a fatigue concern regarding Anderson after his amazing 7-6 6-7 6-7 6-4 26-24 verdict over Isner in the longest semi-final in Wimbledon history.

But the stamina-packed South African picked himself up after long matches against Gael Monfils and Roger Federer in previous rounds and it may be worth taking a chance that he can do it again.

Anderson drifted to 500-1 in the outright betting after losing the first two sets of his quarter-final clash with Federer, and anyone who took advantage of that offer, win or each-way, will be on good terms with themselves.

The big-serving Johannesburg ace, who also won the grandly titled Mubadala World Champion­ship event in Abu Dhabi in December, is the first South African male to reach the Wimble­don final since Brian Norton in 1921 – Durban-born Kevin Curren contested the 1985 final but he had become a US citizen by then.

Anderson's healing may have gathered pace when he saw that Djokovic's thrilling 6-4 3-6 7-6 3-6 10-8 victory over Rafael Nadal was incredibly the second longest semi-final in Wimbledon history.

The quality in the Djokovic v Nadal last-four clash under the roof was there for all to see. But while the Serbian former world number one, who took tennis to new heights earlier in the decade, is the obvious pick to win the lion's share of the groundstrokes, Djokovic is still a work in progress after his elbow injury.

After surgery, Djokovic has had to settle on a new serving style but he has been delivering his first ball well at Wimbledon.

Not as well as Anderson, though. The eighth seed, whose game has come on a ton since using the advice of a sports psycho­logist, has looked solid as a rock in south-west London.

First-serve percentages of 83, 84, 87, 82, 76 (against Federer) and 84 at Wimbledon this year suggest Anderson can win at least a set against Djokovic, possibly two and maybe even three, although it may pay punters to make do with one of the first two. Early on Saturday night there was only an option to back Anderson with a start of 2.5 sets, though.