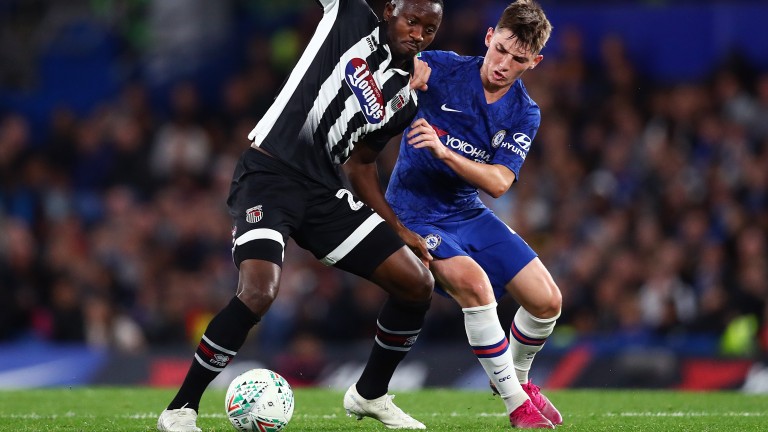 Antonio Rudiger, Ngolo Kante and Ruben Loftus-Cheek have been ruled out. Andreas Christensen and Ross Barkley are doubts.

Frank Lampard’s first home win as Chelsea manager came in the League Cup and he can make it two out of two by masterminding victory over Manchester United in the last 16.

New Blues boss Lampard had failed to win any of his first four home matches since taking charge in the summer but the dam well and truly burst when Grimsby bowled up at the Bridge in round three and Chelsea ran out 7-1 winners. Lampard hasn’t looked back.

That demolition of League Two opposition was the first instalment of a seven-game winning run across three competitions and has put the Chelsea youngsters in a great frame of mind going into a showdown with Ole Gunnar Solskjaer’s inconsistent United.

This tussle comes almost three months since the sides met at Old Trafford on the opening weekend of the Premier League campaign, a game United won – somewhat fortuitously – 4-0.

There were enough hints back then that Chelsea were going to be a decent side to watch under Lampard and, true to his word, he’s allowed academy graduates to flourish in among the old guard and seen results improve markedly.

Now they are chasing an eighth straight win and notwithstanding the team changes he will feel compelled to make, they look the bet to win in 90 minutes.

Lampard will tweak his team. A two-time winner of the tournament as a player he may be, but he also knows the importance of the Premier League and Champions League and they will obviously be prioritised.

But several of the kids who came in against Grimsby will keep their places in a system that will remain unaltered, and there is no reason to think they will let him down.

Indeed, Solskjaer will also shuffle his pack. United, who have had 24 hours less rest than Chelsea, feature in the early kick-off on Saturday at Bournemouth and the Norwegian has to box clever with several key figures injured.

Back-to-back away wins at Partizan and Norwich have been a fillip though few around the club are deluding themselves that a pair of successes at modest opposition are a guaranteed catalyst for great things.

This is a team who needed penalties to see off Rochdale in the last round and remain with question marks all over the pitch.

Since the opening day United have scored one or no goals in eight of nine matches – not helped by too many missed penalties – and that threatens to be a problem tonight and in the long term.

Chelsea have won seven games in a row.

FIRST PUBLISHED 5:31PM, OCT 29 2019
There were enough hints back then that Chelsea were going to be a decent side to watch under Lampard