Manchester United in deeper trouble than the odds suggest 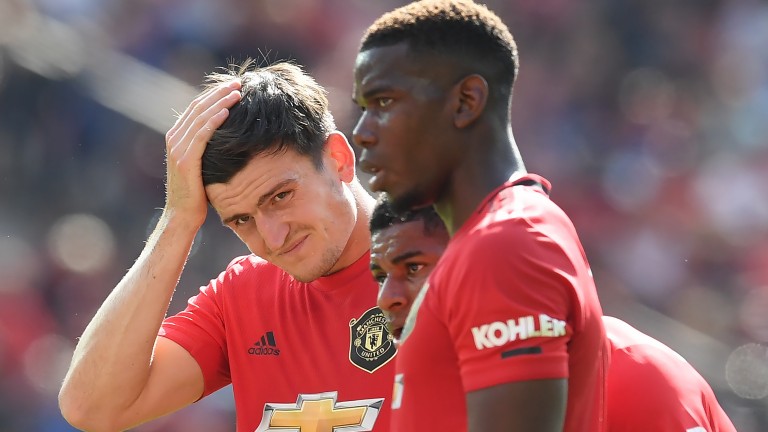 It looks like being a frustrating season for Harry Maguire and Paul Pogba
Michael Regan
1 of 1
By Bruce Millington UPDATED 4:38PM, SEP 18 2019

It is only when you take time to study the list of names that you realise just how weak this Manchester United squad is, and how comically short they are in the betting to achieve anything of note this season.

Their miserable failure to take three points from a Southampton side who were a man short for the last 20 minutes on Saturday was the latest stark indication of how far away they are from climbing back to the top of the Premier League.

The performance was limp, the line-up was poor, the bench offered little in the way of meaningful options and the list of players who were either unavailable or not selected was chronically short of quality and quantity. It is surprising the supporters are standing for it.

Just four games into the season, United are 150-1 to win the title, have drifted out to 7-4 for a top-four finish and are being quoted at as short as 8-1 to end up outside the top ten for the first time in 30 years.

They occupied 13th place in 1989-90 but managed to win the FA Cup, and it is little wonder some disgruntled United fans are branding this the worst squad for three decades. However, considering the group that triumphed at Wembley included the likes of Bruce, Pallister, Ince, Robson and Hughes it is possible you might have to go even further back to find a squad as bad as the one at Ole Gunnar Solskjaer’s disposal.

When United beat Chelsea 4-0 on the opening day it was possible to sense a brighter future was imminent, with the £120 million spent on Harry Maguire and Aaron Wan-Bissaka looking like it had cured a lot of the defensive problems that had affected the side in recent seasons.

They are undoubtedly stronger as a result of those purchases but if Ashley Young can still get a game the unit is far from impregnable, and worryingly David de Gea, after years of near-perfect goalkeeping, is still making the kind of errors that suddenly began to dog him last term.

One of Solskjaer’s biggest problems is that Paul Pogba is still at Old Trafford. This grossly overrated myth of a player should have been shipped out to whichever club still believes he is worth spending a large sum of money on.

Pogba is the classic Match Of The Day player, capable of one or two flashes of excellence per game that will mask in the highlights package how little else he has done over 90 minutes.

He has retained his willingness to try a reckless trick or flick in a dangerous area with no regard for the peril it will put the team in if it does not come off, and while he remains in the side United will continue to struggle. And then sooner or later people will realise he is an integral part of the problem rather than the key to a solution.

Alongside him is Scott McTominay, who gets positive reviews mainly, it seems, by virtue of him being less poor than most of his colleagues rather than because he is a future superstar. It is not a strong engine room and main back-up Nemanja Matic is a less formidable presence these days than when in his pomp.

Further upfield things look equally unpromising. Dan James has started his United career well but is still raw, while the likes of Mata, Pereira and Lingard represent a creative pool that is alarmingly inferior to anything you will find elsewhere in what has been known in recent times as the big six but surely won’t for much longer.

And goodness knows what is going on with Fred, who cost just the £52m but has yet to make the squad this season.

Theoretically, the big ray of hope for United is up front, where Marcus Rashford has the potential to kick on and establish himself as a genuinely top-notch Premier League hitman.

And while that is undoubtedly the case, the outlook if he gets injured or the goals dry up is pretty scary, with Anthony Martial yet to fully convince and, now Romelu Lukaku and Alexis Sanchez have gone, virtually nothing by way of back-up.

All in all, then, this is a squad so threadbare and lacking in experience I would be deeply concerned if I supported United. And yet the betting markets seem slow to recognise how bleak things are for the former top dogs of English football, who, since winning the title in Sir Alex Ferguson’s last season, have managed seasonal totals of 64, 70, 66, 69, 81 and 66 points.

With five points from their first four fixtures this term Sporting Index give them a quote of 65-66.5. That looks distinctly optimistic and if a spread bet is your thing there looks more upside in selling than buying.

The concern for sellers would be that a couple more bad results - and they meet Leicester, West Ham, Arsenal and Liverpool in their next five league assignments - might lead to the Solskjaer experiment being terminated and the possible recruitment of superior operators Mauricio Pochettino or Max Allegri.

But, while it is usually unwise to read too much into the first few results of a new season, it is hard to make a convincing case for United enjoying a season of significant progress, and if there is one thing to keep you going through the tedium of another international break it is the knowledge that you can back Leicester at 4-1 to win at Old Trafford when domestic battle resumes on Saturday week.

Good sports a ray of light in trying times

At a time when some politicians are acting like the most ignorant, rude morons on the planet, it has been uplifting to see a couple of superb examples of sportspeople showing the most woeful MPs the way to conduct yourself.

First Charlie Edwards sent a tweet prior to his WBC world flyweight title defence against Julio Cesar Martinez on Saturday which read: “I wish my opponent all the best in tonight’s fight and that we both get back to our families safe and sound.”

The message was accompanied by a picture of them shaking hands after the warm-up.

I was properly taken aback when I read it. This is not how any boxer has ever talked before a fight and it took a few seconds for his words to compute.

These days it almost feels like a fight will not be sanctioned unless the contestants have burnt pictures of their opponents’ pets during press conferences, yet here was a reigning world champion sending best wishes and hopes for a safe outcome on the day of combat.

It was magnificent albeit I am not getting my hopes up that the era of excruciating staged scenes of artificial hatred between boxers are about to be consigned to history.

The following day there was a truly beautiful sporting moment at the end of a US Open third-round match between Naomi Osaka and Coco Gauff, the 15-year-old who had made such a name for herself at Wimbledon.

Osaka beat her younger rival but was then caught on camera encouraging Gauff to do the post-match interview with her “because these people are here for you”.

An extremely emotional Gauff seemed unsure because she was convinced she would cry throughout it but Osaka told her it was better than going into the shower and crying.

So Gauff blinked back the tears and told the crowd how sweet Osaka had been to her and then insisted on walking away because she didn’t want it to look like she was trying to steal the limelight from the winner.

It made for wonderful viewing and with luck we will see these two fine talents and great sports doing battle many times in the coming years.

There is nothing wrong with the occasional sporting contest taking place amid an atmosphere of genuine animosity, but Edwards, Gauff and Osaka have shown this week that if hatred does not exist it is does not detract from the importance of the clash if the participants show some respect to one another.