Citizens are odds-on for each of the three domestic trophies 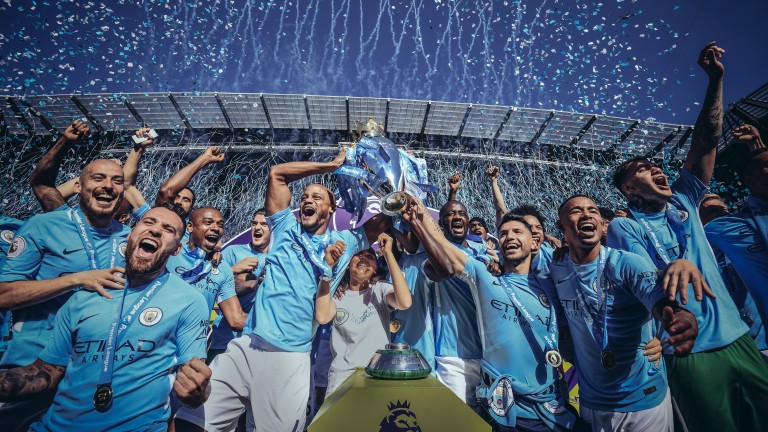 Manchester City remain on course to land an unprecedented quadruple as they prepare to battle Chelsea for the first piece of silverware of the season in Sunday's Carabao Cup final.

Coral priced Pep Guardiola's side at 150-1 for a four-timer at the start of the season and laid them at double that price before cutting them to 66-1 in October and 33-1 in December.

It's now single-figure odds with some firms and Coral spokesman Harry Aitkenhead said: "There was a lot of excitement last year about City winning the quadruple until their hopes were scuppered by Wigan in the fifth round of the FA Cup.

"We have a huge liability on the quad this season as punters have been jumping onto this bet and the odds on a clean sweep are tumbling once again."

City go into the League Cup final as 2-5 favourites to lift the trophy and lump more pressure on underfire Blues boss Maurizio Sarri.

Here we take a look at their chances in each of the four competitions with Paddy Power offering the top price of 9-1 about them winning the lot.

The Citizens have been locked in a tight tussle with Liverpool for the Premier League all season and are quoted at odds-on prices to make it successive title wins.

Unlike their Merseyside counterparts, the bulk of the City squad have been there before and are serial winners, and their 2-1 victory over the Reds at the start of the year must have handed them a psychological edge.

They have, however, suffered three more defeats than Jurgen Klopp's side, who boast the best defence in the division with just 15 goals conceded.

City can take confidence from the fact they have a slightly softer run-in than Liverpool, 6-4 shots for the title, as their rivals have a Merseyside derby to contend with as well as matches with three of the top six.

Anything other than City lifting the League Cup on Sunday would be a shock. That is the way bookmakers view it at least, with City 6-10 to win in normal time and Chelsea as big as 5-1 for victory in 90 minutes.

Maurizio Sarri is on thin ice after their insipid defeat to Manchester United in the FA Cup and City have shown they can blow Chelsea's Sarri-ball set up out of the water, steering six past them in the league.

They saw more of the ball in both league ties against Chelsea this term and Guardiola has won four of his five games against his Italian counterpart.

The quarter-final draw was kind to City, who will face one of the two non-Premier League clubs left in the competition when they travel to Swansea.

They have scored 27 goals in their last five domestic cup fixtures and Guardiola seems unable to field anything but a strong side.

Manchester United are arguably City's biggest challengers left in the cup - they have a trip to Molineux to face Wolves - but even a rejuvenated Red Devils team could struggle to unsettle City's formidable group at Wembley.

Manchester City showed a rare glimpse of vulnerability on their own patch in defeat to Lyon during the Champions League group stage and the European showpiece represents the toughest element of their quadruple pursuit.

They could not have asked for better last-16 opponents than Bundesliga bottom-half outfit Schalke and are already 3-2 up from the first leg in Gelsenkirchen.

As far as squad depth is concerned, no side in the Champions League have better cards to play than Guardiola.

City's exit last season came at the hands of a Liverpool team renowned for edging the tactical battle with their Manchester counterparts.

But the Premier League champions can outclass even Europe's elite at the Etihad. Guardiola has not won the prestigious tournament since 2011, but has the armoury at his disposal to secure the third European crown of his managerial career.