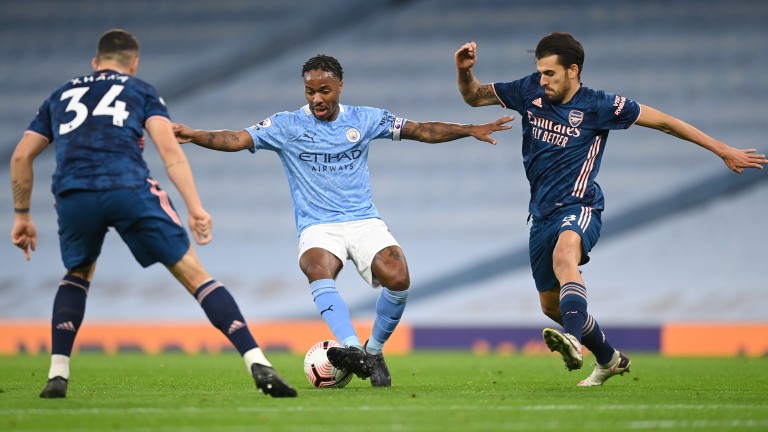 Manchester City and Liverpool have recovered from strange starts by their lofty standards with Pep Guardiola's side winning six and drawing two of their last eight matches, while the visitors have claimed five wins and a draw since that astonishing 7-2 reverse at the hands of Aston Villa before the October international break.

Liverpool also made a difficult away game in Atalanta look easy as they ran out 5-0 winners on Tuesday with Diogo Jota scoring a hat-trick.

The summer signing from Wolves has notched in each of his last four matches and Liverpool's record since Virgil van Dijk was injured reads played five, won five, scored 12, conceded two.

City have also definitely tightened up at the back and kept three straight clean sheets, allowing only 11 shots on target in their last six matches since a chaotic 1-1 draw at Elland Road when Leeds managed to force Ederson into seven saves.

Guardiola has not ruled Sergio Aguero out of the clash, hinting earlier in the week that the striker could yet be available, and Gabriel Jesus made a welcome goalscoring return from the bench in Tuesday's 3-0 stroll over Olympiakos. Benjamin Mendy and Fernandinho remain sidelined for the hosts.

Van Dijk and Alex Oxlade-Chamberlain are long-term absentees and Fabinho is also sidelined. Thiago Alcantara is doubtful, but Joel Matip should be available to feature at the heart of the Reds rearguard.

Second-guessing what Guardiola will do in big battles is not easy and it will be fascinating to see what he has lined up for such an intense fixture.

Nathan Ake would appear tailor-made to slot in at left-back to give City a more solid look but in terms of the attacking options he could do any number of things with only Kevin De Bruyne and Raheem Sterling seemingly certain starters.

Liverpool will presumably go 4-3-3 but who fills the final forward position alongside Mohamed Salah and Sadio Mane is the subject of hot debate.

Jota has made a stunning start to life at Anfield but Klopp loves the link-up play of Firmino and he may want his ability to drop into midfield for such a difficult away game.

Home advantage may not be worth as much these days behind closed doors, but it is still worth something and that points to a punt on City getting back to within two points of Liverpool with a game in hand.

Liverpool have looked good without Van Dijk so far but this, alongside a trip to Bayern Munich, is the most difficult fixture in world football. City to win 2-1.