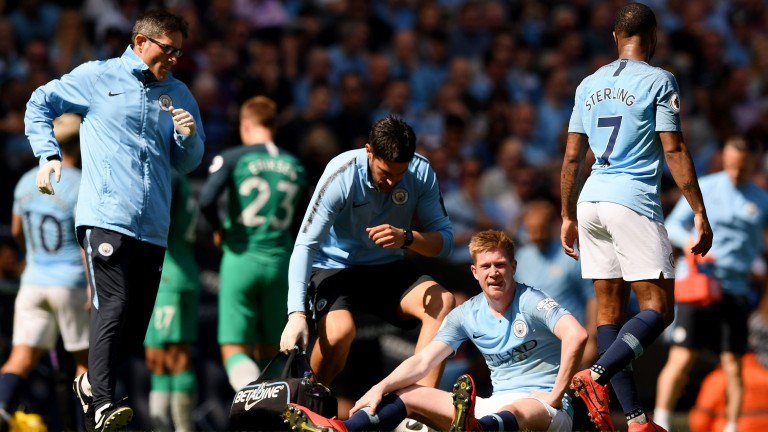 Manchester City reclaimed top spot in the Premier League with a 1-0 victory over Tottenham but their win, three days after being knocked out of the Champions League by Spurs, came at a price.

Pep Guardiola's team are a general 8-15 to retain their crown, but they look set to miss midfield maestro Kevin De Bruyne for Wednesday's Manchester derby at Old Trafford.

After teenage midfielder Phil Foden had nodded home from close range for a fourth-minute winner, De Bruyne was forced off with a hamstring injury in City's tenth successive Premier League victory.

City are a general 4-7 to see off their arch-rivals, who have lost five of their last seven matches and were brushed aside by Barcelona in the Champions League on Tuesday.

The Citizens are a point ahead of Liverpool, who are 7-4 to claim their first top-flight title since 1990. Jurgen Klopp's side travel to Cardiff on Sunday afternoon, searching for their 12th away win of the campaign.

The defeat for Tottenham in a week when they secured their place in the Champions League semi-finals after a dramatic away-goals victory at the Etihad, was a blow for their hopes of a top-four finish.

They remain a point ahead of Arsenal, who are at home to Crystal Palace on Sunday, but Spurs have three of their four remaining games at their new stadium, starting with strugglers Brighton on Tuesday. They are 2-5 with Sky Bet to secure a Champions League berth.

The Gunners are slightly bigger at 4-9 while Chelsea are 13-8 and Manchester United 11-4.

Brighton stopped the rot by claiming a goalless draw at Wolves - one of the first two top-flight draws for more than a month. It puts them three points ahead of Cardiff, who occupy the final relegation spot.

The Seagulls are 9-2 to be playing in the Sky Bet Championship next season while the Bluebirds, who beat Chris Hughton's side 2-0 on Tuesday to give themselves a lifeline, are 1-7 to go down.