Football news What next for Man City?

Pep Guardiola will target the quadruple next season 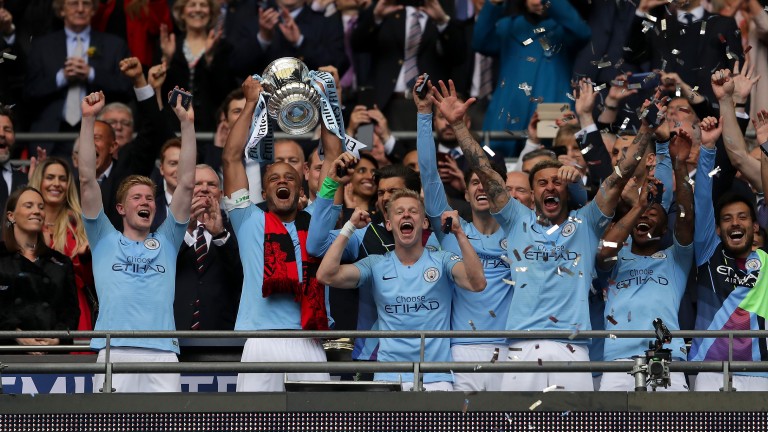 Departing club legend Vincent Kompany won't be there to lift the trophies but Manchester City's dominance of English football is likely to continue after their historic 2018-19 campaign.

City became the first English side to complete the League Cup, Premier League and FA Cup domestic treble when walloping Watford 6-0 at Wembley on Saturday, although Pep Guardiola is not one to let the squad rest on their laurels.

Guardiola's eyes will be focused on improving further and that can only mean one thing - attempting to achieve the quadruple next season.

The only regret City will have from this term is failing to come through their dramatic Champions League quarter-final defeat to Tottenham, a tie they lost by such fine margins on away goals.

If only Sergio Aguero had scored his first-leg penalty against Spurs. If only Fernando Llorente's controversial hip/handball goal was disallowed. If only Aguero had not been inches offside for Raheem Sterling's injury-time 'winner'.

Those tiny moments are all it takes to scupper a perfect campaign, however, Guardiola's side will be back for more and aiming for the quad as long as any potential Champions League ban is not imposed by the start of next season.

Given they came so close to sweeping the board last term it is surprising that City are as big as 250-1 with BoyleSports to win the quad in 2019-20 and 50-1 for another domestic treble.

They will take on that challenge without captain Kompany, who announced he will be leaving Manchester to become player-manager at boyhood club Anderlecht, after 11 remarkable seasons which catapulted City from a mid-table side to Premier League powerhouses.

Kompany signed for City in August 2008, ten days before Abu Dhabi United Group formally completed their takeover from Thaksin Shinawatra and took the club into another stratosphere.

In that time Kompany helped City win four Premier League titles, two FA Cups and four League Cups but it was only in the last two seasons that he and City exerted true dominance over their domestic rivals.

The next step is to conquer the continent although some of the main obstacles standing in their way will still be English teams.

One of the noticeable aspects regarding City's FA Cup final performance was the hunger they showed despite having retained the Premier League title just six days before.

Much of that desire comes from Guardiola but the dressing-room character is also key and it will be interesting to see how they react to the loss of Kompany, who has been such a major presence on and off the pitch.

The Belgian will need replacing and there could soon be a sizeable gap to fill in midfield with 34-year-old Brazilian Fernandinho coming towards the end of his excellent career.

Fernandinho's terrier-like qualities are vitally important to the balance of the side, allowing the freedom for other City players to express themselves.

His absence from the starting 11 for the second leg against Spurs was key, affording the Londoners space to exploit on the counter-attack.

And it may have been an issue on Saturday had Ederson not saved brilliantly from Roberto Pereyra when the score was 0-0.

Offensively, however, City are in no need of an overhaul so there was little surprise to hear Guardiola pouring cold water on talk of a big-money move for Antoine Griezmann.

They bagged six against the Hornets without even having to call on top goalscorer Sergio Aguero.

Rare starts were handed to Riyad Mahrez and Gabriel Jesus but Guardiola showed his ruthless streak when Mahrez was replaced with Kevin De Bruyne so early in the second half.

De Bruyne did enough in the remaining 35 minutes to claim the man-of the-match award and his impact will have sent a warning to City's rivals. This season has been incredible, but there may be scope for further improvement.

De Bruyne was City's player of the season in 2017-18 but has been severely hampered by injuries this term, making just 11 starts in the Premier League and three in the Champions League.

His FA Cup final cameo was a reminder of his amazing talent and, given a proper break this summer, he should be able to return to peak physical fitness.

The big advantage City have over most of their rivals is they are working from a position of strength in so many areas.

Signing a replacement for Kompany will be high on their list, although John Stones (a £47.5million acquisition from Everton in 2016) could have something to say about that having become a peripheral figure in recent weeks.

The holding midfield position looks the main priority because Fernandinho – a crucial element of their success pre and post-Guardiola - is showing signs of wear and tear.

However, City can afford to shop for quality, not quantity and their squad may be even stronger once the starting gun is fired in 2019-20.

Winning the quad will obviously be tough and could depend on some good fortune at key moments but there are certainly worse bets around at three-figure prices.