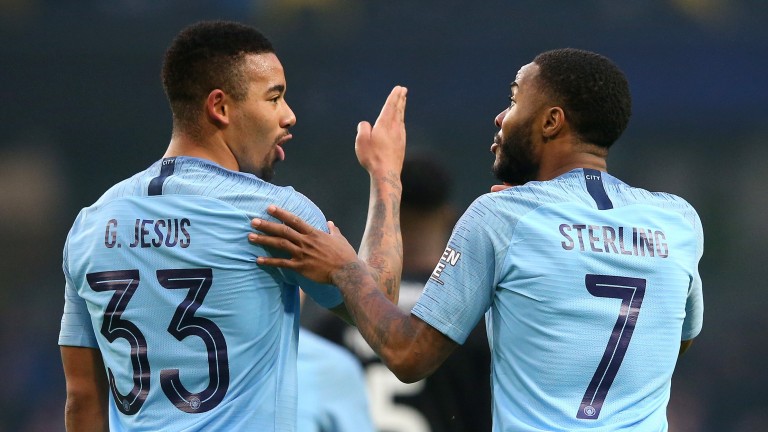 1 Man City are up for the FA Cup

Rotherham will have been looking forward to taking on Manchester City in the third round of the FA Cup but Millers boss Paul Warne may not have been so merry when he saw the names on the home team sheet.

It would be understandable to assume the FA Cup is bottom of the priority list for Pep Guardiola seeing as City are in a tough title race, would dearly love to win a first Champions League trophy and are also in the League Cup semi-finals.

The result was a resounding 7-0 success over the Sky Bet Championship side at the Etihad and the FA Cup favourites will take some stopping in this competition.

2 Sorloth not the answer for Palace

"Alexander Sorloth is a much better player than he’s been able to show," said Crystal Palace manager Roy Hodgson after the misfiring forward drew another blank despite League Two visitors Grimsby playing the entire match at Selhurst Park with ten men. "The last thing you want as a centre forward is the opposing team with ten  men behind the ball. I thought he was unlucky."

Hodgson is perfectly within his rights to protect his player and try to keep his confidence up but Sorloth surely won't get a better opportunity to end his drought which is now at 14 games for club and country.

The Norwegian simply does not look up to Premier League standards.

It's almost a backhanded compliment that Nathan Redmond has 38 England Under-21 caps. You have to be good enough to reach that level in the first place, yet it also means you have failed to successfully move up to the senior squad on a regular basis.

Redmond, now 24, had stagnated at Southampton but the arrival of Ralph Hasenhuttl as boss could be what the attacker needs to get his career back on track.

He scored twice in Saturday's 2-2 FA Cup draw at Derby, making it four goals in his last five matches and Redmond could be a player to watch in 2019.

4 No case for the Bournemouth defence

Eddie Howe has quite rightly earned a reputation as a shrewd manager and at some stage he could move up from Bournemouth, but he needs to get his teams to defend better to stand a chance of being a success at a higher level.

Saturday's 3-1 FA Cup exit at home to Brighton means they have conceded 15 goals in their last four matches to continue the Cherries' shocking run of results since the start of November.

Bournemouth have lost ten and drawn one of their last 13 matches and have some horrible games coming up against Everton, West Ham, Chelsea, Liverpool, Wolves, Arsenal and City in their next eight fixtures.

Rochdale's last three League One matches have resulted in defeats of 4-0 to Bradford, 5-0 to Doncaster and 4-0 to Burton with Keith Hill saying after the Brewers hammering: "During my time here as a player, as the youth team coach and as a manager, that’s the worst experience I’ve had."

Hill is a Rochdale legend, but he is unusually downbeat and if he needs picking up who will be lifting the players for next week's trip to Peterborough?