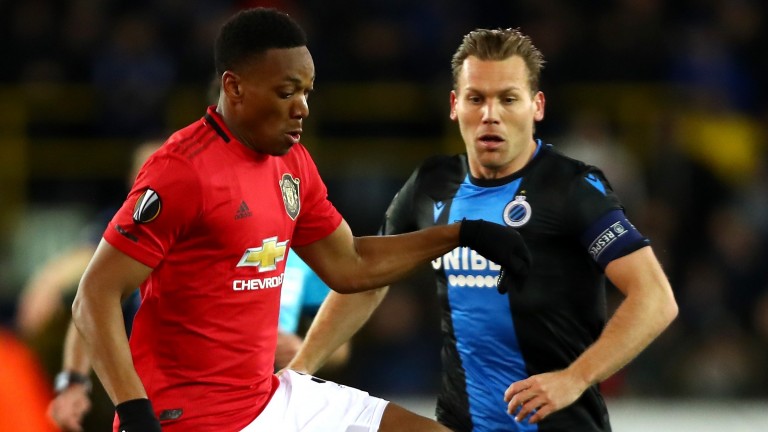 Free football tips, best bets and analysis for Manchester United v Club Brugge in the Europa League round of 32.

Manchester United to win & under 3.5 goals
1pt Evs Betway
Back this tip with Coral here

Club Brugge
Key forwards Emmanuel Dennis and Krepin Diatta are out along with captain Ruud Vormer while Eder Balanta is suspended.

Former Manchester United manager Louis van Gaal described the Red Devils' 1-1 draw with Club Brugge in the Europa League as a "lousy contest" but the English side can succeed without being great entertainers in the second leg of their knockout encounter.

The Manchester club need only to keep a clean sheet at home to progress from the round of 32 after Anthony Martial bagged a key away goal in Belgium.

That came after Emmanuel Dennis, who scored twice away to Real Madrid earlier in the season, put Brugge ahead in an uninspiring game where the opener came from route-one football and the equaliser from a defensive blunder.

The chances of an attacking Brugge outfit showing up are diluted by the absence of Dennis, while seven-goal winger Krepin Diatta will also be missing for the visitors.

United are stretched in the final third themselves with Marcus Rashford still sidelined and Odion Ighalo slowly getting back to his sharpest since the transfer from the Chinese Super League.

And in a drab, rainy contest in Belgium United yet again failed to take initiative in the final third.

They rank 11th in terms of big chances created in the Premier League this season - their tally of 38 in 27 games is bettered by  Brighton, Burnley, Wolves and Sheffield United among others.

Bruno Fernandes has looked electrifying at the start of his United tenure and offers some hope in that department but if they are to use the back-door route to Champions League football next season and go all the way in the Europa League, it will be courtesy of their defence.

They are one of only five clubs in the league to have conceded fewer than 30 goals this term and that reflects well on their summer acquisitions of Harry Maguire and Aaron Wan-Bissaka.

That defensive grit has also been a feature of their European campaign, in which they are yet to concede at home.

The Red Devils beat Astana, AZ Alkmaar and Partizan Belgrade by an aggregate scoreline of 8-0 in the group stage and needing to simply see out this contest plays to their strengths.

Goals have dried up in recent weeks for Brugge, who have managed only four goals in their last five Belgian Pro League matches either side of the first leg.

They are also a side built on a solid rearguard, shipping only 12 league goals all season, and the injury-hit Belgians are not suited to playing on the front foot.

With another three knockout rounds to go after this match until the final, the Europa League is a marathon not a sprint and Ole Gunnar Solskjaer will be hoping United's more cautious approach will earn him something Van Gaal could not secure during his time in Manchester - a European trophy.

Manchester United have lost only two of their 14 home league games this season.