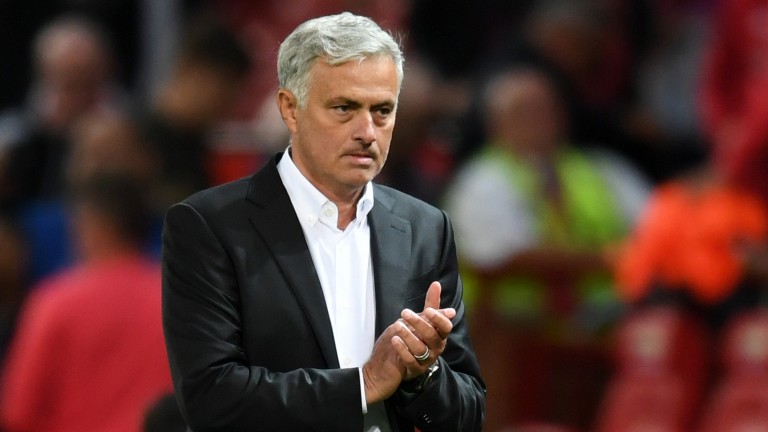 Jose Mourinho watched his side make a dismal start against Newcastle
Michael Regan
1 of 1
By James Milton 8:08PM, OCT 6 2018

Manchester United traded at 25-1 in-play before coming from 2-0 down to beat Newcastle 3-2 at Old Trafford.

Several bookmakers suspended betting on Jose Mourinho being the next Premier League manager to leave before kick-off and the under-pressure hosts made a shocking start to the game.

Kenedy, a 22-1 chance to open the scoring, and Yoshinori Muto put Newcastle 2-0 up inside ten minutes and they went 1-10 in-play before second-half goals from Juan Mata, Anthony Martial and Alexis Sanchez completed a dramatic comeback.

The result may not be enough to save Mourinho, however, and Hills make him 4-7, from 1-3, to be the next top-flight boss to leave his position. He is 7-4 to leave before the end of the international break and 2-5 to still be in charge for United's trip to Chelsea on October 20.

Bournemouth were the big winners in the 3pm kick-offs, beating Watford 4-0 at Vicarage Road. The Cherries, 13-5 shots to take the three points, were helped by the dismissal of Watford’s Christian Kabasele in the 32nd minute.

There were also away wins for Everton (2-1 at Leicester) and Wolves, who beat Crystal Palace 1-0 at Selhurst Park, while an early goal from Eric Dier proved enough for Tottenham against ten-man Cardiff.

The Bluebirds are 1-5 for relegation but Huddersfield, another of the favourites for the drop, picked up a point thanks to a 1-1 draw at Burnley.

In the Sky Bet Championship, Aston Villa lost their first game since the sacking of Steve Bruce, going down 2-1 at Millwall.

Thierry Henry is 8-11 favourite to take charge at Villa Park with Mourinho’s former assistant Rui Faria next in the betting at 21-10.