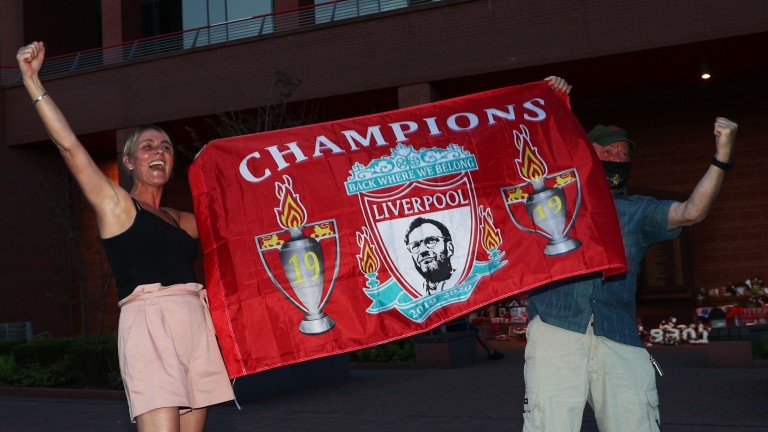 You wait 30 years for a title and then two come along at once. Or maybe they won't, as bookmakers make Manchester City favourites to win the 2021 Premier League ahead of Liverpool, who were crowned champions on Thursday.

The 2020 title triumph was Liverpool's first since 1990 and their 19th overall as they defied pre-season odds of 13-5 to deny 8-13 shots City a threepeat in stunning circumstances.

Jurgen Klopp's rampant and relentless Reds were fully aware they would have to reach heights few have previously attained to overhaul City, after 97 points was not enough in 2018-19 and the magical Merseysiders have done just that.

One defeat, two draws and 28 wins from 31 Premier League fixtures have given Liverpool the potential to smash records over the rest of this unique season, but the betting world never stands still and attention has quickly focused on the next potentially thrilling tussle.

It's often said that retaining the title is even more difficult than winning it the first time and Betfair rate Liverpool 7-4 to go back-to-back, while 5-4 is the best available for City, who are odds-on in places.

A staggering 23 points divides the clubs this term and the current table makes a total mockery of next season's betting. How can a team perched on 86 points with a possible 21 still up for grabs not be considered favourites again?

The answer lies in the performance data, which still rates City as the better outfit even allowing for all of the perceived problems in Pep Guardiola's defence.

Statistics website fbref, which is powered by data from Stats Bomb, shows City's expected goal difference this season at 42.8 with Liverpool at 28.8 when their actual goal-difference tallies are plus 44 and 49 respectively.

According to Understat, Liverpool have accumulated just shy of 22 points more than expected this term while City have left six points on the table through a lack of efficiency in both boxes.

To that extent Aymeric Laporte's serious injury against Brighton in August was a hammer blow to City's title defence with the centre-back featuring only ten times in the Premier League. Mistakes were made and punished and Liverpool just kept winning.

The gap was two points when Laporte was crocked and by the time he returned in January the Liverpool procession was already in full swing, helped by a 3-1 success over City at Anfield in November.

John Stones, Fernandinho and Angelino were in the City back four that day with Claudio Bravo as goalkeeper and even then Klopp admitted afterwards to having "sympathy" for City following controversial VAR calls in a pivotal fixture.

However, the chasm which exists in the table is a dangerous illusion and key forwards Mohamed Salah and Sadio Mane could potentially be away at the Africa Cup of Nations for a month between January and February next season.

City could also be banned from the Champions League, leaving them with fewer distractions and giving Pep more prep time to wrestle the title back to Manchester.

Those concerns for the champions are for another day.

After 30 years it's only right the party should go on for some time - and judging by the social media videos from Liverpool's squad it did - but bookmakers' 2020-21 title odds will offer a slightly sobering effect for those sore heads.