Magic Imps can contribute to another Cup thriller 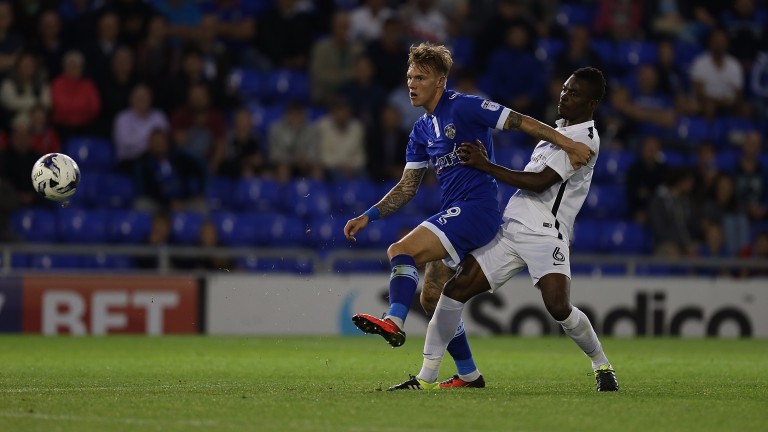 Billy McKay of Oldham Athletic plays the ball under pressure from Gabriel Zakuani of Northampton
Pete Norton
1 of 1
By Dan Childs 8:25PM, DEC 4 2016

It will be hard to top the excitement delivered by Wimbledon’s stunning fightback at Curzon Ashton, but the final instalment of this FA Cup second-round weekend should be a cracker with National League high-fliers Lincoln and Sky Bet League One strugglers Oldham set to serve up a high-scoring match at Sincil Bank.

Lincoln are the highest scorers in the fifth tier – netting 49 times in 23 games – and were top of the table until Tranmere leapfrogged them with a 1-0 victory at home to York on Saturday.

Imps fans have had to suffer several seasons of frustration but everything has changed since Lincoln snapped up highly-rated manager Danny Cowley from Braintree in the summer.

Cowley performed minor miracles by taking part-time Braintree into last season’s National League playoffs and is making the most of the increased financial resources available to him at Lincoln.

Several of his signings have made a major impact but Cowley has also got the best out of the players he retained, including burly striker Matt Rhead, who has 11 goals in 21 league appearances this season.

Rhead’s aerial strength is an important facet of Lincoln’s direct style which has proved extremely successful, with Cowley’s men among the top six since the start of the season.

But Lincoln have not always been watertight in defence and their hopes of upsetting Oldham may depend on how they get on without suspended centre-back Sean Raggett.

Jamie McCombe, who only recently recovered from a hamstring injury, is set to play for the first time since August but it looks a tough ask for the 33-year-old to be thrown back in against higher-division opponents.

Oldham are second-bottom in League One and are by far the lowest scorers in the division with just 11 goals in 19 league games.
However, they have scored ten goals in their last four cup fixtures and will fancy their chances of exploiting an understrength National League defence.

Latics manager Steve Robinson has spoken of the importance of the match to the club’s finances, given the possibility that victory could set up a lucrative third-round tie, and his players should be raring to go having not played in almost two weeks since a 2-2 draw at Port Vale.

Picking a winner is as tough as the odds suggest. However, Lincoln’s attacking prowess and potential defensive weakness points to it being a lively affair and both teams to score looks a solid wager.

Team news
Lincoln
Centre-back Sean Raggett starts a suspension after his dismissal in a 1-0 win at home to Wrexham last Tuesday and Callum Howe and Elliot Whitehouse are cup-tied. Jamie McCombe (hamstring) is short of match fitness but is set to start.

Oldham
Paul Green is in contention after recovering from injury but Marc Klok (calf) remains sidelined.