Lynched on Twitter for suggesting tennis scoring system could be improved

Should horse racing do away with fractional odds? 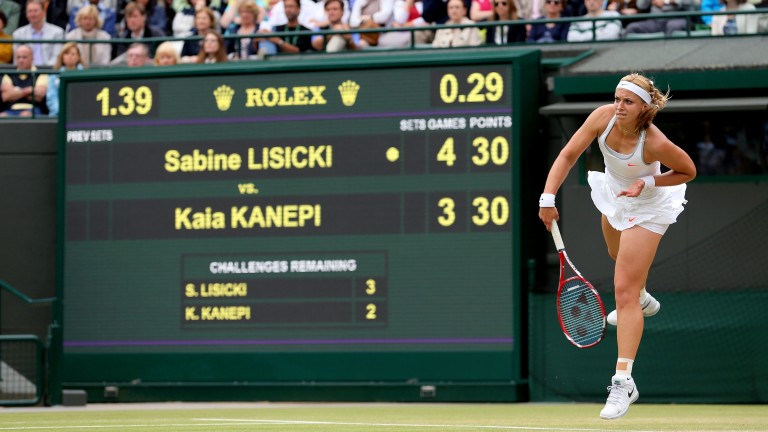 Things you will not only be unable to change at any point in your lifetime but also risk getting lynched merely by suggesting them: the scoring system in tennis.

So it’s Sunday morning, we are watching Roger Federer getting eliminated from the Australian Open by an exciting new talent (well, new to me) from Greece called Stefanos Tsitsipas, and someone in the room who is not a regular tennis watcher observes how weird the scoring system is.

It hadn’t really occurred to me before but when I stopped and thought about it I had to agree it is indeed strange. I suppose I picked it up fairly early in life, but we must all have wondered at some point why you have to go from love to 15 to 30 to 40, with possible advantages and deuces thrown in, before you win a game.

I tweeted something about how odd it was when you come to think about it, just to see what other people thought, and it was like dipping my hand into a stream without realising there were piranhas beneath the surface.

It’s not weird. Tradition is important in sport. It’s perfect. It allows the momentum to ebb and flow. What’s wrong with you?

Twitter reacted with venom in a way that suggests nothing should ever change and indeed we should revert to farthings, shillings and half a crowns.

One person even demanded to know if I was aware of the origins of the system, as if I had committed a crime by failing to familiarise myself with how one of the world’s most popular sports adopted, and somehow retained, such a bizarre scoring method in the first place.

I really couldn’t care less how it came to be, but a cursory piece of research suggests something about a clock and maybe medieval France, neither of which leads me to believe the world would suddenly stop rotating if we went with something slightly more intuitive like, I don’t know, one, two, three, four, etc.

Why bother, many people asked. Here’s why: because using conventional numbers, as well as being far simpler for newcomers to grasp, would create a more compelling range of statistics.

Television broadcasters could display this information in pleasing graphics that would enhance the viewing experience for everyone as well as providing more for stats lovers and punters to chew on.

There would, it must be acknowledged, be the potential for game and set scores to be confused, but an agreed method of quoting the set score and then the game score would nullify that problem, and it would also sort out the anomaly whereby games are scored in the current traditional (peculiar) method but tie-breaks use a more conventional system of one point per point won.

It is not the most urgent sporting alteration, but it is an obvious thing to do and the resistance to it is strangely ferocious. Indeed if tennis fans are so against a simple modernisation of how games are scored, it shows how difficult it will be for racing to make similarly obvious changes.

Should horse racing do away with fractional odds?

As the hardcore tennis fans were quick to point out, why does racing not do away with furlongs and fractional odds?

The fractional odds question is interesting but is actually sorting itself out organically in that traditional punters who call a 6-4 shot a 6-4 shot rather than a 2.5 shot are served with the prices they are comfortable with in the shop environment, while younger punters who can visualise the potential returns more easily if they are expressed as 3.25 rather than 9-4 can choose the decimal option on their digital devices.

Having a big switch-off of fractional odds would shed more punters than it would attract, thus reducing racing’s income even further.

Race distances and riding weights are arguably more worthy of focus. Nobody who has not got a GCSE in racing knows how far a furlong is, and distances are a total mess these days with the precise journeys only being revealed on the day when the clerk of the course has finalised his rails positions.

I would be all for switching to kilometres, with a partial compromise that could last for however long was necessary by showing the distances in their current format in brackets.

Displaying the weight each horse has to carry in something other than stones and pounds makes even more sense. It is still a minor pain to calculate how much more or less a horse has in hand by having to work out what 11-2 is compared to 10-7, and it would be far better to adopt kilograms, again with the current numbers being shown for however long it takes for people to realise it is far easier having a single figure to work with.

Most of all, though, it is time for horses to stop being traded in guineas, a unit of currency that, for everyone else, went out of circulation 205 years ago.

Pounds seem to work perfectly in every walk of life so perhaps that is one of a number of ways in which the bloodstock industry could consider finally falling into line?

Tradition has its place in sport, but it is important to balance that with the need to modernise in a way that ensures new fans feel engaged. You can go too far with the tinkering – see Formula 1 – but you can also risk lagging behind.

It's time drones were told to buzz off

Drones are about to dethrone wasps as the most annoying flying objects in the world unless the Government takes action and bans the infernal things except where there is a clear benefit to them, such as maybe delivering life-saving medicine to remote locations.

We saw the harm they can do during the pre-Christmas fiasco at Gatwick, and even as recreational items they are a nuisance.

The lad next door is a great bloke but he recently acquired a drone which has a range of something like half a mile. I think he’s actually got bored of it now but when it was new it would buzz around the house at all hours meaning you suddenly had to think about whether it was safe to wander around with little or nothing on in case he’d strapped a camera to it.

On a more sinister level, while I’m not one who shares the concern of others that every time you step out of the house you are at risk of being the victim of a terrorist atrocity, it is fairly obvious that drones bring a whole new range of possibilities to those who seek to create carnage.

And now racing is getting hot and bothered by a dronesmith who is using his flying machine to bring live pictures to in-running punters, much to the chagrin of the picture rights holders, who want to protect their assets.

The person creating these transmissions is not breaking the law and it would be fair to say that, in a sense, he is showing commendable innovation.

What amazes me, though, is that there is such a market for pictures that are ahead of those of Racing TV (which is around 1.5 seconds behind real time) and particularly Sky Sports Racing (which is eight seconds, or nearly a furlong, off the pace).

Punters – I use the term loosely – based either at the course or getting these fast shots, make money by using the time advantage in the in-running Betfair market, but it is baffling that they still have anyone to match their bets, given that it must be virtually impossible to win if you are watching on TV.

There must still be enough people who still fancy their chances despite the picture delays they are enduring but surely this type of betting is unsustainable in the long run – as, hopefully, is the current easy availability of drones.