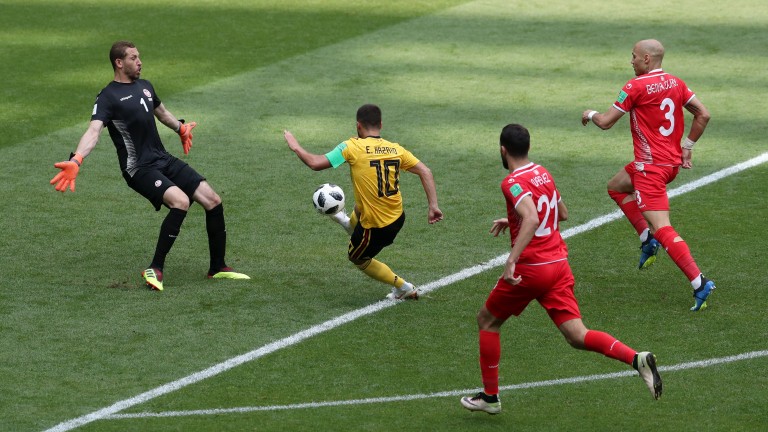 1 Belgium’s big guns have hit the ground running
Some big names have failed to fire in Russia but Belgium’s leading lights can’t be accused of not displaying their talent following an emphatic 5-2 win over Tunisia.

Eden Hazard took just six minutes to get the first of his two goals, while Romelu Lukaku became the first player to score two or more in consecutive World Cup games since Diego Maradona in 1986.

Roberto Martinez's men have scored eight times in racking up two successes, with Hazard and Kevin De Bruyne providing their star striker with a hatful of chances, and England must be wary of the threat they possess.

Star-studded Belgium are serious World Cup contenders and sent a warning to the Three Lions, who needed an injury-time winner to tame Tunisia.

2 Belgium's bench shows their quality
Chelsea's Michy Batshuayi enjoyed a successful loan spell at Borussia Dortmund last season and he showed his quality by coming off the bench to grab a late goal.

Batshuayi could have had a couple more but in the 22 minutes he was on the field he was a real threat and that highlights Belgium's strength in depth.

Instrumental Tottenham midfielder Mousa Dembele and Vincent Kompany were unused substitutes and Marouane Fellaini featured for only 30 minutes. Belgium have a deep squad and that could take them far in the competition.

3 Tunisia can finish the group on a high
Defeats to England and Belgium mean Tunisia are heading home but they can take plenty of positives from their performances.

Few gave the Carthage Eagles much chance of progressing but they showed far more attacking intent against Belgium and created plenty of chances in a wide-open game.

They had 16 shots, with five on target, four more than they managed against England, and if they play with the same intensity against Panama they look a good bet to finish their World Cup campaign on a high.