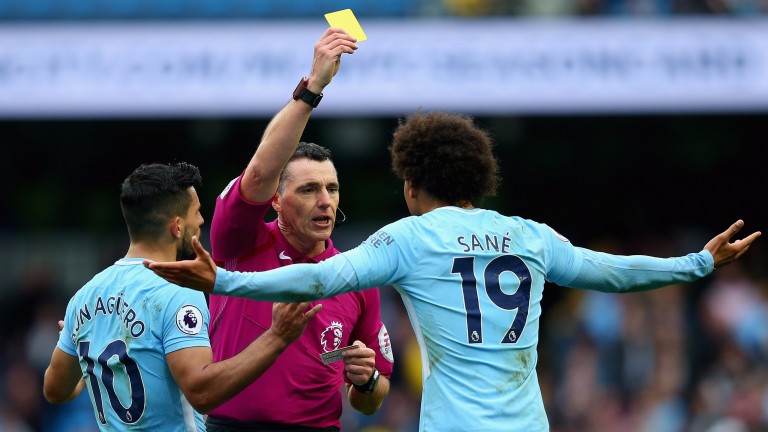 Neil Swarbrick is a good and experienced official who has handled 120 Premier League games
Getty Images
1 of 1
UPDATED 8:00PM, NOV 24 2017

Sooner or later those sequences will end. It could happen today. But the chance of another low card count may be better than bet365 estimate.

Back under 3.5 Asian total cards in the Premier League game between United and Brighton at decimal odds of 1.775 – similar to fractional odds of 10-13. Each yellow will count as one and each red as two. The bet will win if there are no more than three yellows and no reds or, alternatively, one red with no more than one yellow.

One of the reasons there have been so few cards this season at Old Trafford is that for United things have gone according to script. They won all six, scoring 19 goals and conceding only once. Out of a total of 540 minutes played they led for 304 and trailed for just 23.

That is what United fans would have hoped for and what visiting fans, players and managers would have realised could happen.

When heavy favourites do not win, card counts can rise. There may be times at Old Trafford this season when United draw or lose. And Brighton are as capable as several others of being the team who produce such an upset. They defend well, and although they will probably spend most of this afternoon without the ball, they have the ability to use it when they do get it.

In other Premier League games with comparable goals expectations the chance of few cards being shown is generally higher than the 56 per cent suggested by decimal odds of 1.775.

The referee at Old Trafford will be Neil Swarbrick, a good and experienced official who has handled 120 Premier League games across eight seasons. In the past he has shown a high number of cards no more often than most of his colleagues. The chance that he will be required to show fewer than 3.5 cards today may be better than bet365 calibrate.

THOUGHT FOR THE DAY

There are good and bad times to take a job. Now is probably a bad time to become manager of Wales or Northern Ireland.

Both have overachieved, and the credit has been given to their managers. Chris Coleman has now left Wales to manage Sunderland. Michael O’Neill is still manager of Northern Ireland but has other possibilities, including an offer from Scotland.

Coleman and O’Neill seem to be fine coaches, in so far as an outsider can ever judge such things. But they were not primarily responsible for their countries’ success.

Much of the credit should go to someone in the Uefa competitions department – or whoever first suggested expanding the European Championship from 16 to 24 teams, nearly half the Uefa membership.

Teams who in the past had qualified rarely if at all now found they had a much better chance of reaching the finals. And if they got there they found that almost nobody would be eliminated at the group stage.

Without doing much differently from before, Wales, Northern Ireland – and Ireland too – suddenly found themselves in the Euro 2016 round of 16. There Wales beat Northern Ireland and progressed to the quarter-finals, where they beat Belgium, the only supposedly good team they needed to beat to reach the semi-finals.

Neither Wales nor Northern Ireland nor Ireland will be at the World Cup. As I wrote last year, getting to the World Cup was harder because there are little more than half as many places for European teams.

Succeeding Coleman or O’Neill last year would have been riskier than doing so now, but there are still serious dangers.

Small countries tend to shine in international football periodically. As they have fewer players to choose from it would be unreasonable to expect them to excel consistently. But if Wales, for instance, qualify for Euro 2020 people will say the manager carried on where Coleman left off. And if Wales do not qualify people will say the manager is useless and shout: Bring back Coleman.