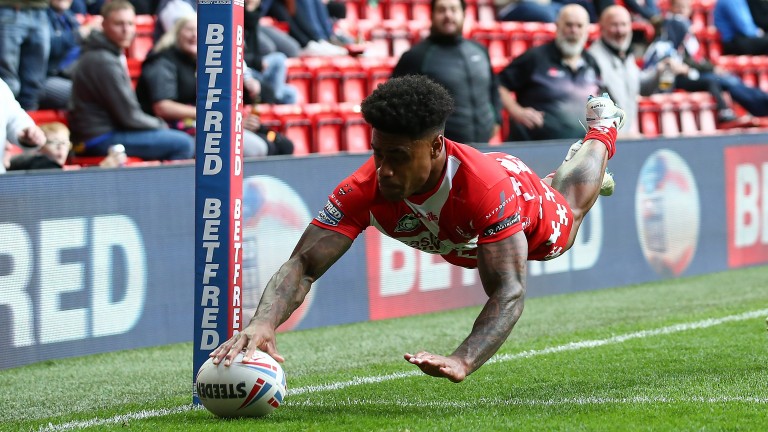 St Helens' relentless early-season march shows no sign of slowing down and Justin Holbrook's leaders are a warm order to notch a 16th win in 17 Betfred Super League outings at bottom club London on Sunday afternoon.

Saints, who were beaten semi-finalists in the league and the Coral Challenge Cup last year, have won more games, scored more points and conceded fewer points than any of their 11 top-flight rivals and look the best side in Super League by some distance.

They are charged with overturning a general 18-point handicap on their trip to the capital but supporting in-form centre Kevin Naiqama in the tryscorer markets could be the best bet on the game.

Fiji international Naiqama has made a barnstorming start to his Saints career, notching ten tries in 14 league outings including eight in his last four which includes hat-tricks against both Hull outfits.

At 9-1 with Betfair he looks a decent each-way punt with a quarter of the odds paid if he is one of the first three tryscorers.

Former England, Leeds and Warrington coach Smith replaced Tim Sheens in the Rovers hotseat in midweek but with little time to work with his new troops it may take a while for KR to adjust to his methods.

Champions Wigan have lost their last three games in all competitions but will be looking to pull away from the lower reaches of the table with a run of fixtures against the teams around them over the coming weeks.