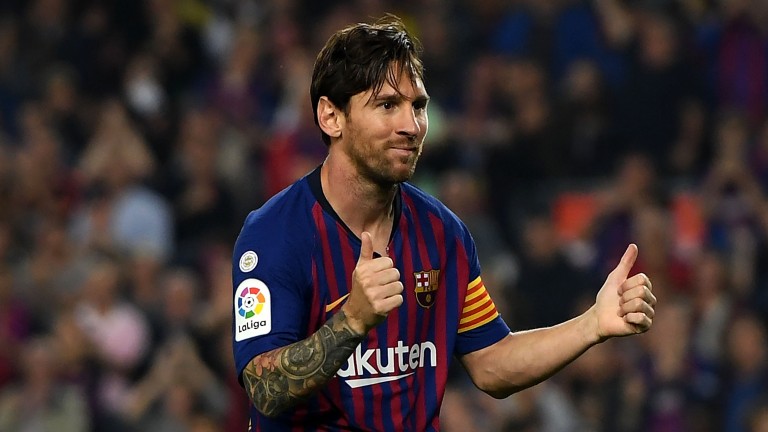 It used to be argued that La Liga was boring, not because it lacked star talent, but rather because too much of the talent resided at Barcelona and Real Madrid to make Spain uncompetitive.

Real Madrid won La Liga in 2011-12 with 100 points, aided by Cristiano Ronaldo's 46 goals, a tally which which was still not even enough for the Pichichi, Spain's version of the Golden Boot. That honour went to Barcelona's Lionel Messi following a remarkable 50-goal season.

The following campaign Messi's magic waned - he scored only 46 times - as Barca proved they could reach Madrid's 100-point tally. They were top for the entire season, lost only twice, scored in every match and finished 15 points clear of Real Madrid. Atletico Madrid were stranded on 76 points to further enhance the belief Spain was a two-team league.

Not even a miraculous title for Atletico in 2013-14 could stop the Premier League from proclaiming itself to be the best league in the world. For "best" read "competitive", said some of the more sane commentators, although that definition does not really work either as Spain's best of the rest continued to thrive in the Europa League.

Now it's different. Manchester City are Europe's best team and Champions League favourites but La Liga has been ultra-competitive.

Champions Barca are top, one point clear of three outfits including ultimate surprise package Alaves, but are stuck on only 24 points, ten fewer than this stage last season and six below their five-year average in the past five years.

That's still enough to be four points up on sixth-placed Real Madrid, who felt they had little choice than to sack coach Julen Lopetegui following their 5-1 battering at Barca last month. Santi Solari was promoted from the B team in a bid to restore pride.

Between them, the big three of Barcelona, Real Madrid and Atletico have failed to win 17 of their fixtures through 12 rounds, while from the same match days the Premier League's unbeaten trio of City, Liverpool and Chelsea have failed to win just nine times.

It has left a compelling title race, on paper at least, although Barca are expected to retain the crown judging by odds of 4-9 with Real Madrid at 5-1 and Atletico 13-2 shots. The Alaves fairy-tale remains a 1,000-1 chance. Never say never, eh Leicester fans?

Do Barca deserve their status?

Pep Guardiola was once asked about who was favourite for a competition and replied: "Where does Messi play? They are favourites." But football is rarely that simple as anyone who backed Argentina to win the World Cup will testify.

The 4-3 home loss to Real Betis, which followed hot on the heels of a dramatic comeback 3-2 success at Rayo Vallecano, highlights Esteban Valverde's outfit are a long way from being good things at 4-9.

Any side with Messi, Luis Suarez and Philippe Coutinho in the front three will overload many opponents but the Catalans are yet to face a top-six opponent on their travels this season.

All that changes with a trip to the capital on Saturday to face Atletico, a team who have conceded ten goals fewer in La Liga. Barca are on a run of ten league matches without a clean sheet.

World Cup winner Samuel Umtiti, out since late September with a knee complaint, will soon be back to fitness and his return at centre-back can't come quickly enough.

Sporting Index quote Barcelona's 2018-19 points at 83.5-85 but renowned US statistician Nate Silver's website FiveThirtyEight is less bullish. Their estimation from at least 20,000 simulated seasons predicts a return of 80 points.

Are Madrid for real under Solari?

Argentinian Solari has made the best start of any Real Madrid manager, claiming four straight wins, 15 goals and conceding just twice from a nice set of fixtures against Melilla, Valladolid, Viktoria Plzen and Celta Vigo.

It's also true that the last three of those opponents hit the woodwork in potentially game-changing moments when the scores were level.

"Football is won by goals, not merit," bemoaned Solari's predecessor Lopetegui shortly before he was shown the door. "We just did not have the luck that you need."

Those who believe your make your own luck won't have sympathy for Lopetegui, nor for president Florentino Perez, who sold Ronaldo and failed to properly replace one of the greatest goalscorers to have ever stuck on a pair of football boots.

And yet on expected points Lopetegui is bang on.

Real are matching Barca stride for stride in expected goals (Xg) and Silver's website ratings rank the Madrid side ever so slightly superior this season.

Atleti out to defy the odds again

Talking of Xg brings us nicely to Atleti, who are distinctly average on the stats. Only Alaves's miraculous set of results is seen as more fortunate based on chances created and given up.

Again, however, this comes back to the old argument between Xg disciples and the non-believers. Are Atletico defying the data because they possess arguably the world's best keeper in Jan Oblak or will it catch up with them in the coming months?

What is not up for debate is Atletico's mainly awful performances this season so it is a good sign they are up to second without playing well. Is a drop back inevitable? Sporting have Diego Simeone's side in for 75 points which may even be a touch optimistic.

Sevilla are a silky-skilled side with plenty of goals shared around the team - only Barcelona have scored more - and they could well outperform dismissive 40-1 quotes without being consistent enough to go the whole hog.

Espanyol were 2-1 losers at Sevilla before the international break, their third defeat of the season and all of those were by one goal away to current top-six teams.

Alaves were bottom with six points from 12 games last season when they appointed Abelardo as their third manager of the campaign and the turnaround has been nothing short of astonishing.

December dates with Sevilla and Atletico will tell us more but even in this expect-the-unexpected kind of season, any sort of challenge from Alaves would be filed under the bonkers category.