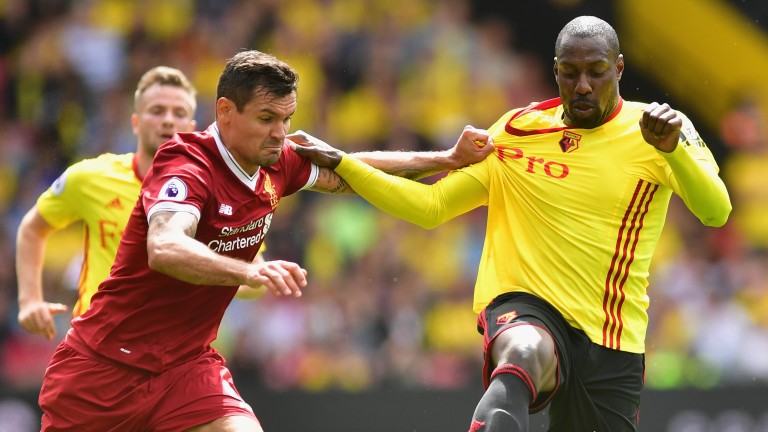 Dejan Lovren of Liverpool and Stefano Okaka of Watford during the first meeting this season
Alex Broadway
1 of 1
6:17PM, MAR 17 2018

Referee Anthony Taylor showed three yellow cards on the first weekend of the Premier League season when Watford played Liverpool. The chance that he will be required to show no more when Liverpool play at home to Watford on Saturday may be better than bet365 estimate.

Back under 3.5 Asian total cards at decimal odds of 1.95 – equivalent to fractional odds of 19-20. Each yellow will count as one and each red as two. So the bet will succeed if there are no reds and no more than three yellows, or if there is one red and no more than one yellow. Anything else and the bet fails.

The result-related markets seem reasonable given the disparity in resources between the clubs and the results both have achieved. The second thing is a consequence of the first.

In a typical Premier League game with these result expectations fair odds for under 3.5 cards would be about 1.65. There are reasons for thinking fair odds would be bigger – though perhaps still not as big as 1.95.

Taylor is one of the best Premier League referees, something that is recognised by his appearances in the Champions League. He has tended to show slightly more cards than most of his colleagues – though the difference has been only about one more card every five games over nine seasons. So not much.

As we should have expected, however, high match totals have occurred less often when Watford played the best opponents. The Premier League big six, in alphabetical order, are Arsenal, Chelsea, Liverpool, Manchester City, Manchester United and Tottenham. During the last three seasons Watford have played 33 Premier League games against those teams, and in 22 the card count was under 3.5. In fact, we should not have expected low make-ups quite so often.

And Liverpool’s games during the three seasons they have been managed by Jurgen Klopp have produced overall an unusually high number of low make-ups.

Chelsea manager Antonio Conte was right to say his side were unlucky to go out of the Champions League to Barcelona.

They lost 4-1 on aggregate, which sounds like a resounding defeat. In both legs, however, they had most shots. Allowing for the quality of shooting positions the fairest score in both legs probably would have been 1-1. The actual scores were 1-1 in the first leg and 3-0 in the second.

What is interesting is that Chelsea had more attempts in total in both legs despite spending least time in possession in both legs.

These are other illustrations of what I wrote last week – that a team can have more attempts than their opponents even if their possessions are usually much shorter. What matters with attacks is effectiveness.

Conte said Barcelona’s finishing was clinical. It is a word that could have been used to describe Chelsea’s build-ups, particularly in the first leg at Stamford Bridge.

Barcelona are a great team with the best player in the world. Chelsea are unfortunate to have been beaten by them.