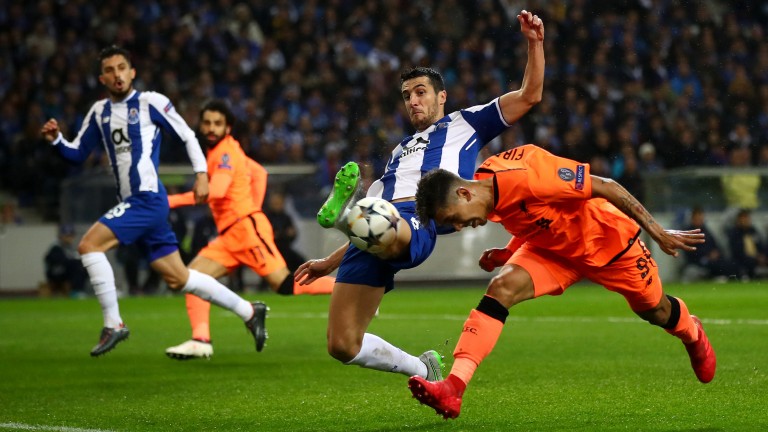 Liverpool's nerve-jangling pursuit of a first league title since 1990 has overshadowed their Champions League campaign but bookmakers don’t expect the Reds’ European run to be ended by Portuguese champions Porto.

Jurgen Klopp’s men are the shortest-priced favourites to qualify from the quarter-finals as they face a side who they defeated 5-0 on aggregate in the last 16 last season.

All five of those goals came in the first leg, away from home, and Porto will be determined not to make things so easy for Klopp’s side this time around.

They can take heart from the fact that Liverpool have not been at their best in recent victories in the Premier League.

They needed a late penalty to win at lowly Fulham and required a hugely fortunate own goal to take the points at home to Tottenham before a hard-fought 3-1 win at Southampton.

Yet Liverpool are still grinding out the wins – five on the trot in all competitions including a 3-1 victory away to Bayern Munich to seal progress from the last 16.

That followed a goalless first leg against the Bavarian giants at Anfield, where Liverpool had 15 attempts on goal but only two on target. Bayern failed to test Alisson even once, however, and Liverpool’s defensive record in European home games points to a tough night for Porto’s forwards.

Klopp’s men have kept clean sheets in seven of their last nine home Champions League games and, while they have conceded at least once in their last five wins in all competitions, before that they had shut out Bournemouth, Bayern, Manchester United, Watford and Everton in consecutive matches.

The betting may not give Porto much of a chance of progressing but they have to be respected after knocking out a dangerous Roma side, who lost to Liverpool in last season’s semi-finals.

They needed extra-time to turn around a 2-1 first-leg deficit against the Romans thanks to an impressive display at home, with Moussa Marega leading the line superbly.

If Porto keep things tight at Anfield then they will believe they can give Liverpool a scare in the return leg at Estadio do Dragao.

It is hard to pick holes in either team’s form this season. Like Liverpool, Porto are in a bitter battle for the league, level on points with Benfica despite having lost both fixtures against their title rivals this term.

These teams have the best defences in their domestic divisions with Porto having conceded just 17 goals in 28 league games this season.

They won five of their six games to top an admittedly weak Champions League group, seeing off Schalke, Galatasaray and Lokomotiv Moscow, and should be able to avoid another rout against the Reds.

Liverpool have had to push hard for late winners in their last three matches so a slight drop in intensity is inevitable – especially with another key league game against Chelsea coming up on Sunday – but they have the class to grind out a first-leg lead.

Porto
Alex Telles is expected to recover from a hip injury but Hector Herrera and Pepe are suspended.