Jurgen Klopp's side can keep up winning habit at Anfield 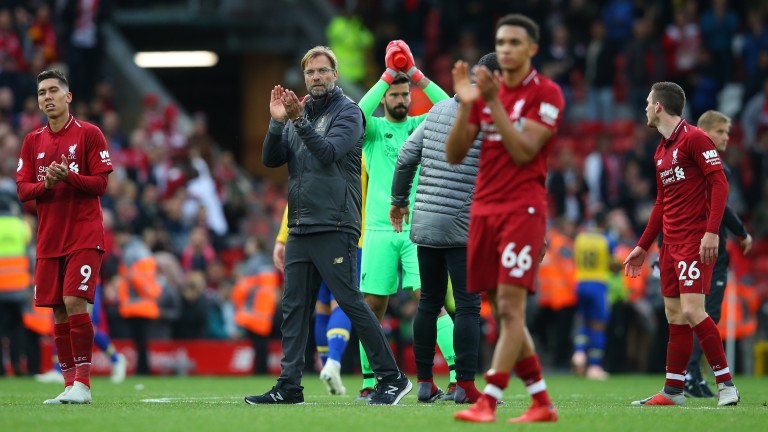 Newcastle
Steve Bruce has said he will "wait and see" whether Miguel Almiron is fit enough to start. Scott Longstaff has joined Andy Carroll, Allan Saint-Maximin, Matt Ritchie and Dwight Gayle on the sidelines.

The only remaining perfect Premier League start can remain in place with Liverpool fancied to make it five wins out of five by beating Newcastle at Anfield.

Jurgen Klopp's side have not reached the performance levels of last season just yet but they have not needed to in comfortable successes over Arsenal, Burnley, Southampton and Norwich - and it could be the same story against limited Newcastle.

The visitors have caused the biggest upset of this season's Premier League, beating Tottenham 1-0 at the new White Hart Lane, and that will give them a semblance of belief.

It's only a crumb of comfort given Steve Bruce makes the trip to Merseyside minus a full squad and that Spurs result is an outlier in an otherwise dodgy start.

The Magpies lost to Arsenal and Norwich, were knocked out of the League Cup by Leicester and needed a wrongly-awarded goal to draw 1-1 at home to Watford.

The prohibitive match odds highlight the almighty gulf in class and it may pay to head to the correct-score markets with 3-0 as the main bet and a smaller wager on Newcastle grabbing a consolation.

Newcastle's five-man defence nullified static Spurs to an extent in the baking August heat, but the fluidity of Mohamed Salah and Sadio Mane for the Champions League winners is on a different level.

Salah and Mane had a minor bust-up at Burnley over the perceived selfishness of the Egyptian, a row that is unlikely to have escaped the attention of Jurgen Klopp, so expect the ace African pair to be back on their best behaviour as the Reds look for their 14th straight Premier League victory.

At some stage the run will have to end, however, it's far more likely to happen on their travels with Liverpool rampant at fortress Anfield. Klopp's side have won their last ten games at home and kept clean sheets in five of their last seven.

The one area of frustration could come in a recurrence of the odd dozy defensive moment that has blighted them this season, particularly in the latter stages with Norwich, Arsenal and Southampton all notching late consolations.

Alisson's injury has unsettled them slightly with Adrian still finding his feet as the back-up keeper and many pundits have pointed out that Liverpool are using an aggressive high defensive line.

Newcastle don't have much to recommend them as an attacking threat with Joelinton, the hero at Spurs, often isolated but if the game is already won Liverpool's minds could start to wander with a difficult Champions League trip to Napoli to come on Tuesday.

Liverpool have won 11 and drawn two of their last 13 home matches against Newcastle.