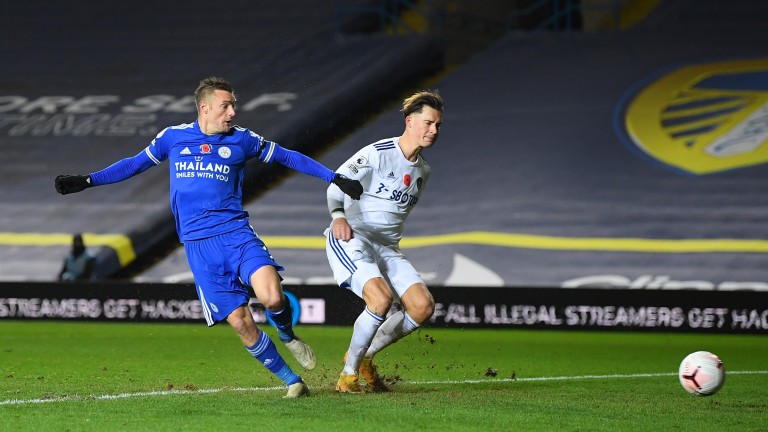 Liverpool were unbeaten in seven going into the international break, a run culminating in a solid 1-1 draw at Manchester City. They have still lost only once in the Premier League, that crazy 7-2 reverse at Villa.

Leicester hit the top of the Premier League thanks to a 1-0 win over Wolves, a sixth straight win across two competitions. Away from home this season they have played four and won four, including eye-catching successes at both Manchester City and Arsenal.

Liverpool
Joe Gomez is the latest Liverpool player queuing up for his turn on the Anfield treatment table after suffering a knee injury on England duty. Like central-defensive partner Virgil van Dijk, Gomez could miss the remainder of the season. Jurgen Klopp’s selection headache doesn’t stop there, though. Gomez’s possible replacement Fabinho is also a doubt, Rhys Williams has a knock and more importantly Mo Salah is self-isolating after testing positive for Covid-19 while on international duty.

Leicester
The Foxes will have to wait on the fitness of defenders Wesley Fofana, who has a knee injury. Timothy Castagne and Caglar Soyuncu remain sidelined, while goalkeeper Kasper Schmeichel faces a fitness test after suffering a knock to his head.

"You can control the game with and without the ball. If you force the opponent to open up then you have the players to expose them – it's all about the pace that we have up front, which is very hard to defend."

So says Leicester stalwart Christian Fuchs, leaving nobody in any doubt how Leicester will approach their trip to Anfield.

The pace of Jamie Vardy on the break is an electric weapon which terrifies the best defences – and Liverpool's won't be at their strongest.

Leicester's tactics, therefore, will be to invite Liverpool on, something which the Reds, ordinarily, would be happy to do.

Jurgen Klopp's headache, however, is two-fold. Firstly, how bold is he prepared to be, how high a line is he willing to keep, given the threat on the counter the Foxes pose?

Secondly, given the number of key players missing, is does he need to take risks and does have anyone who can pass a way through Leicester's massed ranks? Thiago Alcantara would be the obvious lockpicker – if fit.

Without Virgil van Dijk, Trent Alexander-Arnold, Mo Salah and one or two others, the Liverpool machine simply cannot be at its majestic best and while anyone who is drafted in has bought into the Klopp methodology and the Liverpool style, they are going to be some way from their strongest.

Leicester are just born to play on the road with ex-Reds' chief Brendan Rodgers setting up his side to play without the ball and find holes in behind when they can break.

Desperately unlucky to lose at Liverpool last year, the Foxes have an outstanding chance.

Klopp, of course, is no mug and it's almost inevitable Liverpool won't be as expansive as usual. To that end, this may well be close and not the free-scoring bloodbath many expect.