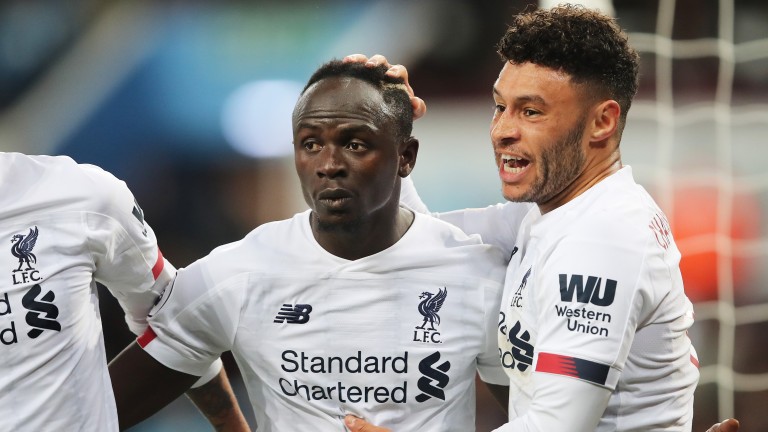 Liverpool were staring at their first Premier League defeat of the season with three minutes to go at Aston Villa, but goals from Andy Robertson and Sadio Mane ensured Jurgen Klopp's side maintained their six-point lead.

The Reds hit 25-1 to win at Villa Park when it looked as if Trezeguet's 21st-minute goal would mean they headed back to Merseyside without reward but they boosted their chances of gaining their first top-flight crown since 1990 with three priceless points.

They are 4-5 with bet365, Hills and Sky Bet to get the job done and chief rivals Manchester City staged their own late comeback.

Southampton showed no ill-effects of their embarrassing 9-0 thrashing at the hands of Leicester last week when James Ward-Prowse gave the unfancied Saints the lead at the Etihad.

But Sergio Aguero brought the Citizens level with 20 minutes remaining before Pep Guardiola's side grabbed a winner three minutes from time from the unlikely source of full-back Kyle Walker. They had drifted to as big as 15-8 to take three points.

Champions City are 11-10 to retain their crown while Chelsea enhanced their their top-four credentials with a 2-1 victory at winless Watford.

Last week's 3-1 win at Norwich is their only victory away from Old Trafford since February.

Arsenal were pegged back by a Raul Jimenez equaliser as they drew 1-1 with Wolves at the Emirates.

The Gunners are fifth in the table but 21-10 with Betfair and Paddy Power to book a place in the next season's Champions League.

Sheffield United won 3-0 at home to Burnley to move up to sixth and the Blades are 2-9 to extend their stay in the Premier League beyond this season.

West Ham were unable to to come back from a three-goal deficit against Newcastle as the Hammers fell to a 3-2 defeat at the London Stadium while Brighton beat Norwich 2-0.

Leeds went top of the Sky Bet Championship with a 2-0 win over QPR while it was a day of shocks in Europe with Barcelona losing 3-1 at 8-1 shots Levante and 13-2 home underdogs Eintracht Frankfurt beating Bayern Munich 5-1.