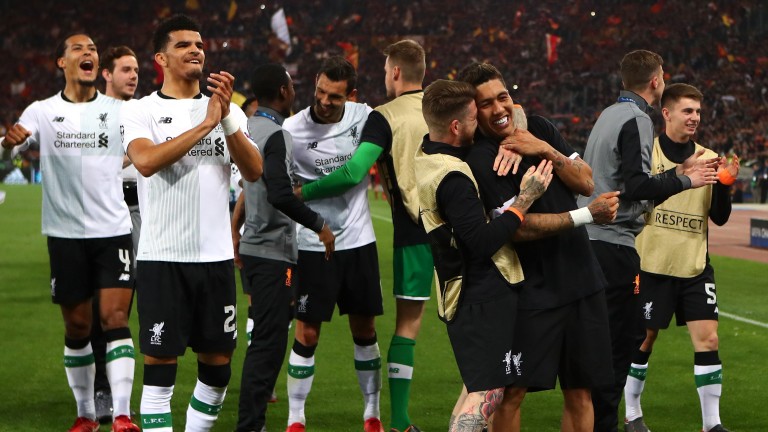 Liverpool celebrate after edging out Roma on aggregate to reach the Champions League final
Getty Images
1 of 1
By Liam Flin UPDATED 6:03PM, MAY 3 2018

Liverpool are a general 11-10 to win the Champions League after progressing to the final in Kiev courtesy of a 7-6 semi-final aggregate success over Roma.

The Reds suffered a 4-2 defeat at Stadio Olimpico in Wednesday night's second leg but first-half goals from Sadio Mane and Georginio Wijnaldum meant they were always likely to hold on to their 5-2 advantage from Anfield to make their first major European final since 2007.

On that occasion, Liverpool lost out 2-1 to Milan in Athens. However, in May 2005, Rafa Benitez's Kop Kings had stunned the Rossoneri in Istanbul to win the European Cup for a fifth time.

Jurgen Klopp's men will face Real Madrid on Saturday May 26. The Spanish giants are 8-11 to win a third successive Champions League title.

Real Madrid are 6-5 to prevail in 90 minutes, as they did 4-1 in last year’s final against Juventus. Liverpool to win on penalties, as they did in Istanbul in 2005 after coming back from 3-0 down at the break, is a best-priced 14-1.

If the Premier League side are triumphant it could be good news for Mohamed Salah in his quest to win the 2018 Ballon D'Or.

Hills have priced up Salah and Cristiano Ronaldo as 6-4 joint-favourites and offer 4-1 about five-times winner Lionel Messi.

Ronaldo is the top scorer in this season's Champions League with 15 goals, five more than Salah.

They will attract a lot of attention in the build up to the final and punters can bet on their combined goal tally with bet365.

The firm offers 2-1 that the dynamic duo fail to score and 25-1 that they net four of more goals between them.