Roma defy the odds to knock out Barcelona 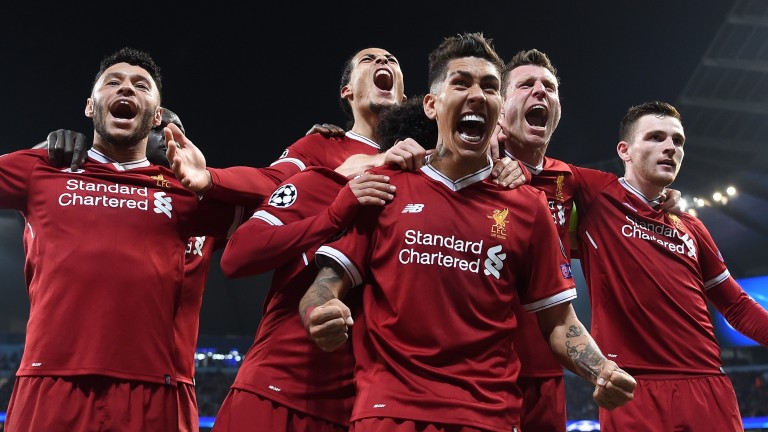 Liverpool are a best-priced 10-3 to be crowned kings of Europe after reaching the last four of the Champions League for the first time in ten years with a convincing 5-1 aggregate win over Manchester City.

Jurgen Klopp’s Reds travelled to the Etihad leading 3-0 from the first leg but found themselves a goal down after just two minutes as Gabriel Jesus steered home Raheem Sterling’s pass.

But Liverpool battled through intense first-half pressure and Mohamed Salah’s 39th goal of the season put them in control of the tie before Roberto Firmino’s cool finish confirmed them their first Champions League semi-final for a decade.

There hasn’t been an English winner of the Champions League for six seasons - Chelsea’s triumph over Bayern Munich in 2012 was the last time - but Liverpool have an excellent chance of breaking that duck.

Roma pulled off a remarkable comeback to stun Spanish giants Barcelona, overhauling a 4-1 first-leg deficit to book their place in the last four.

Roma were 55-1 with Betfair to qualify after their Camp Nou drubbing but a 3-0 victory in the Italian capital saw them progress on away goals.

BoyleSports made Barcelona as short as 1-1,000 to make the semi-finals ahead of their trip to Rome but the Italian outfit became only the third team in Champions League history to overturn a first-leg defeat of three goals or more.

Real Madrid, who hold a 3-0 first-leg lead over Juventus, have replaced compatriots Barca at the head of the market and are now best-priced 13-8 to win their fourth European crown in five years.

Bayern Munich, who host Sevilla, are next in at 2-1, with Roma generally a 10-1 chance.