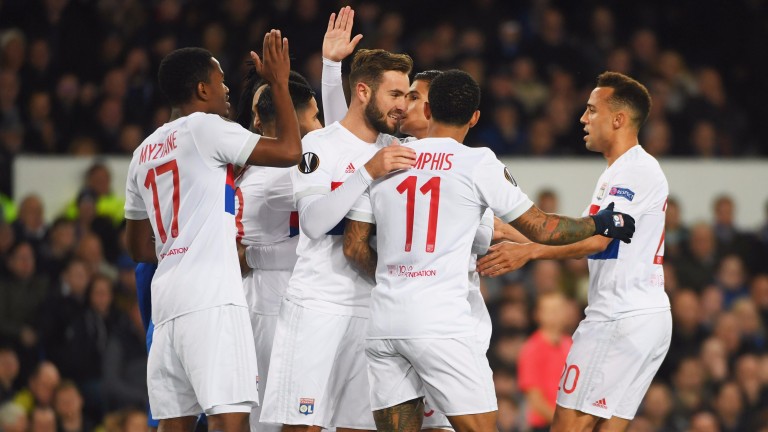 Lyon have plenty of attacking options at their disposal
Ross Kinnaird
1 of 1
By Steve Davies 6:04PM, NOV 1 2017

Everton's woes show no sign of ending and there are few obvious grounds for thinking they can turn their season around in Lyon.

An abject start to their Europa League campaign, which mirrors the misery that is their Premier League season to date, means they’ve probably got to beat Lyon, Apollon and Atalanta in their last three games to sneak into the last 32.

That seems implausible and they’ll probably fall at the first of those hurdles.

A shambles at the back, toothless up front and with an absence of any sort of impact from their midfield playmakers, the Toffees are in utter turmoil and the relative ease with which Lyon beat them 2-1 at Goodison two weeks ago suggests David Unsworth must be fearing the worst.

Unsworth would love to register a win in what could possibly be his last game in charge after his first two efforts since replacing Ronald Koeman ended in defeat at Chelsea and Leicester as Everton’s winless run was extended to seven matches.

The interim Everton chief doesn’t seem to quite know what to do – stick with the stars who Koeman signed or introduce the kids he knows from the academy.

The upshot is confusion and injuries to class acts like Seamus Coleman and Michael Keane is not helping.

Lyon look very hard to oppose and so buoyant are they and so insipid are the visitors that it may pay to to back Les Gones getting this tie done early.

It’s a risk, but if you don't want to be tucking into short match odds the Lyon-Lyon half-time/full-time double result has got to be well worth considering.

Everton just don’t look like keeping teams out and face another defensive reshuffle for this trip.

Unsworth is already short of numbers and Sunday’s massive clash with Watford has to be uppermost in his thinking given the parlous state of their Europa League prospects.

Lyon have led at half-time in eight of their 14 matches this season and have never been behind. They have scored 15 first-half goals – that’s eight more than Everton have mustered in all ten Premier League games – and the Lyon-Lyon bet landed at Goodison.

It also copped in their two games since, against Troyes and stragglers Metz, a match in which boss Bruno Genesio accused his players of being "smug".

He insists that won’t happen against Everton, especially after some bad blood in the first game, and because the Europa League means so much to a side who reached the last four last season. Lyon will also host the final which is another incentive for them.

They are currently third in Ligue 1, have beaten Monaco 3-2, and their only defeat this season was away to Paris Saint Germain.

Doubts over replacing Alexandre Lacazette seem to have been allayed by the performances of Mariano Diaz, the Dominican Republic frontman signed from Real Madrid, who has bagged eight in 11.

Nabil Fekir has grabbed five in his last three and Memphis Depay chipped in with a hat-trick against Troyes.

They are in seriously good nick and determined to beat Everton even with Sunday's Derby Rhone-Alpes against St Etienne on the horizon.

Key stat
Lyon have scored in their last 26 home matches.