Lively encounter on cards at Ajax

Meetings with AZ have featured goals 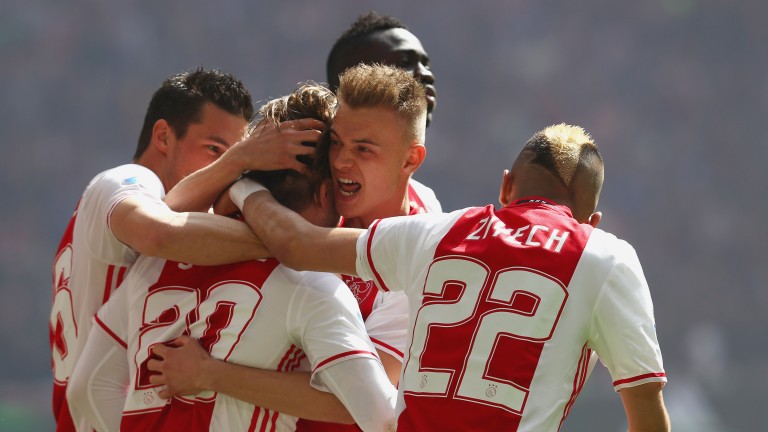 Five of the last seven Eredivisie meetings between Ajax and AZ Alkmaar have seen at least four goals scored and a bet at 5-4 on the net bulging four or more times when the sides clash at the Amsterdam ArenA tonight looks good value, writes Max Oram.

Second-placed Ajax will be in good heart after Sunday’s 2-1 home Klassieker success, marked by Lasse Schone’s stunning free-kick, over leaders Feyenoord made the title race lively again.Top scorer Kasper Dolberg (13 goals) may return after a leg injury too, although Bertrand Traore was excellent up front.

Peter Bosz’s side have been brilliant in front of their fans since a sluggish start to the campaign of a draw with Roda JC and a loss to Willem II. They have claimed 34 of 36 points at the Amsterdam ArenA in 12 league matches and they have won five on the spin since the draw with third-placed PSV. Games against Heracles, NEC, Utrecht and Zwolle have seen five or more goals scored.

AZ were hammered 5-2 at Feyenoord in their last league away game, while they exited the Europa League 11-2 on aggregate to Lyon and PSV won 4-2 at the AFAS Stadion in February.

However, it has not been all bad or boring in recent weeks for sixth-placed AZ. They won 4-0 at home to ADO den Haag before the international break and won 2-1 at Heerenveen in February.

After a low-scoring start to the season Ajax have hit 13 goals in their last five home league games and they can keep up that run against a shaky Alkmaar defence.