Little movement among those pushing for divisions 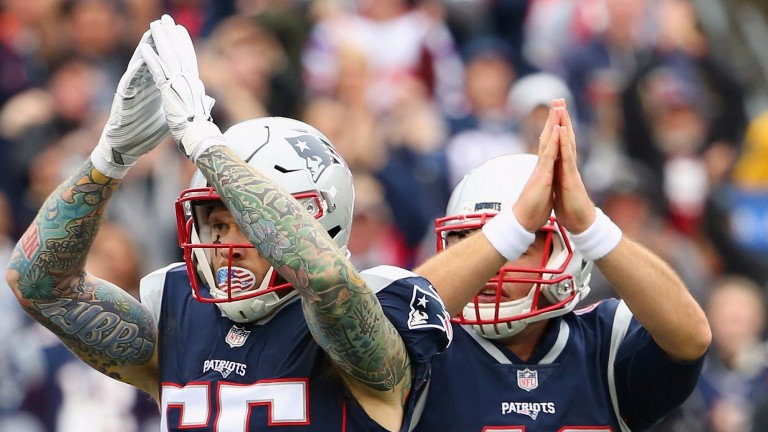 The Pats will be content with their first half as they put their feet up this week. A return to the playoffs should be a matter of routine, although two remaining games against Buffalo will be key.

Their slump against Jacksonville seems a distant memory after three straight wins and that’s the only time they have conceded more than 20 points. They’re going along swimmingly.

After two defeats, they were back to winning ways with a key divisional success. Their opposition in the AFC West seems to be falling away so they need to keep grinding.

It was unusual to see the Seahawks involved in a shootout but the nature of their win over the Texans should boost their confidence. The addition of left tackle Duane Brown is a timely boost to their offensive line.

A victory over San Francisco was expected but they are still looking strong. Bringing in Jay Ajayi is interesting but he needs to step up after a poor campaign.

The Vikings have taken charge of the NFC North and their defensive quality has the potential to make them a real force in the second half of the campaign.

Ezekiel Elliott scored two touchdowns against Washington but they should cope if his long-awaited suspension does kick in. They still have the potential to push the Eagles all the way.

The Falcons just got over the line against the Jets but at least it was a win after a poor show against New England. They have enough talent to kick on.

The Saints have won their last five matches and finally the defence are getting the job done. The NFC South is up for grabs and they can take it.

The Packers have had a week off to come to terms with the loss of Aaron Rodgers, but the situation can’t look any rosier and their slide is likely to continue.

11 Tennessee Titans (down one)
Record: 4-3
Last week: Bye
This week: 3.5-point favourites at home to Baltimore

A week off to strengthen Marcus Mariota’s hamstring was ideal. Their offence needs to get going, especially their running game, which failed to ignite in their last outing against the Browns.

12 Carolina Panthers (up one)
Record: 5-3
Last week: Won 17-3 at Tampa Bay
This week: One-point favourites at home to Atlanta

Another offence that is struggling to shine and Cam Newton no longer has that deep outlet after Kelvin Benjamin’s departure to Buffalo. Their defensive quality is a big plus though.

Brock Osweiler is back in at quarterback and he needs to initiate a spark. History suggests that may be a struggle and the pressure on their defence is immense.

The joy at beating the Chiefs last week did not last long and their offence is struggling. Five defeats in six games have left them with a mountain to climb.

The Bucs just haven’t been able to get going all season and Jameis Winston has been struggling. They are in danger of being left behind in an open race for the NFC South.

The Lions have really looked the part at times this season but they are struggling to be consistent. There is still potential for them to be a factor in the NFC North though.

The big movers this week. The Bills are looking strong on both sides of the ball and they now have a new target in Kelvin Benjamin. The long playoff wait could come to an end.

18 Jacksonville Jaguars (down one)
Record: 4-3
Last week: Bye
This week: 5.5-point favourites at home to Cincinnati

The Jags defence can be fierce and they are making big strides. If Quarterback Blake Bortles can step up, they have good potential.

The Rams we’re entitled to look back during their bye week on a fine first half of the season. You can’t really go up the list when you don’t play but expect their stock to continue rising.

The Redskins are not a bad team, they have just got themselves in a bit of a pickle. They probably have to rely on the Eagles and Cowboys slipping as their divisional record is so poor.

A 40-0 win cannot do anything but raise confidence, but is was against a woeful Dolphins offence. Joe Flacco was injured and they still have much to do to show they can threaten the Steelers in the AFC North.

Drew Stanton takes over from injured quarterback Carson Palmer and they will still be smarting after their thumping by the Rams at Twickenham. Will require snookers if they lose to the 49ers this week.

The Dolphins offence looks all over the place and it is interesting to see them trade Jay Ajayi after he failed to hit the heights of last season. Plenty to prove after their mauling In Baltimore.

A case could have been made to move the Texans up further despite their defeat in Seattle. Quarterback DeShaun Watson looks the real deal and they are definitely factor in the AFC South.

Their three-game winning streak came to an end against New England on a disappointing afternoon for Philip Rivers. The season is turning into a real slog but they should still pick up a few more wins.

26 Cincinnati Bengals (up one)
Record: 3-4
Last week: Won 24-23 at home to Indianapolis
This week: 5.5-point underdogs at Jacksonville

A hard-fought wins as big favourites over Indianapolis may not be much to crow about but at least they put a few points on the board. There’s still a long way to go though.

Mitchell Trubisky looks exciting at times but there doesn’t seem much confidence in the rookie quarterback’s passing ability. They would be a factor in the NFC North if they could score a few more points.

The Giants have plenty to work on now their campaign is effectively over. The defence is not performing that badly but the offensive line need to give Eli Manning a chance.

Stand-in quarterback Jacoby Brissett is not performing that badly but the Colts are not giving themselves a chance. That their two victories have come against the Browns and the 49ers speaks volumes.

At least the Jets are being competitive, which is more than many people predicted. It would be a surprise if they were still in the bottom three at the end of the regular season.

Jimmy Garoppolo has joined the quarterback ranks but is not sure to feature this season and the Niners have nothing to lose for the rest of the campaign. It’s proving the transitional season that many anticipated.

The Browns started well in London but we’re unable to see the job through, admittedly against a good team. At least they can’t lose this week.